Israeli muralist has designs on almost a dozen HISD schools

Posted by HISD Communications on January 9, 2014

In this week’s I am HISD, which features district students, graduates, employees, and other team members, Israeli expatriate Anat Ronen talks about where her work can be found at district facilities, how she comes up with the designs for her murals, and what advice she would offer students who also dream of making their living as artists. 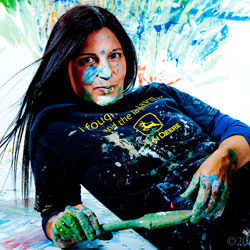 Anat Ronen (all images courtesy of the artist)

You’ve painted several murals at HISD schools, including one in the library of Garden Oaks Elementary, one in the auditorium of Wilson Montessori, and several on the outside of Dodson Elementary—one of which is visible from the freeway just south of downtown. How many others have you done for HISD and where are they located?

I’ve done about 10 or 12 in HISD. Aside from the three you’ve already mentioned, you can see my work at Benavidez, Codwell, Durham, and Marshall elementary schools; Fondren and Marshall middle schools, and Jordan High School. I’ve also worked on schools in other ISDs, such as Clear Creek, Pasadena, and Galena Park.

What was the first mural you painted for HISD, and how did you get involved in the project?

My first mural was for Barbara Jordan High School. Once I became an approved vendor, I sent out some targeted emails, was invited to submit quotes, and from one project to the next, it became more of a word-of-mouth type of thing.

I noticed that several of the campuses you’ve worked with (Dodson, Garden Oaks, and Wilson) are Montessori schools, which encourage students to learn at their own pace. How did that factor into the designs you chose?

When I come up with a design, it’s like a cake. There are many ingredients that together make a good design. Not only do the location, surface, size, and distance from it matter, but also what the client—in this case, the school—wants, envisions, or represents. At Garden Oaks, the emphasis was on local nature, and my design took that to the extreme. At Dodson, the most important thing to the principal was to show diversity and curiosity. Wilson really wanted to emphasize the Montessori theme.

In general, how do you come up with your designs? Who all gets a say in what they will be? Are you presented with a general theme and then left to your own devices to develop it, or are requests more limited in scope?

I take the time to learn a little about the school’s history, demographics, needs, and wants and come up with designs tailored to each. I learn and listen. Then I let the ideas flow and start putting them together on a sketchbook. Some die there, and some become mockups that I send to the principals to start a brainstorming session in which eventually, the final design is decided upon. Sometimes, it’s as short as agreeing on the first mockup, but others, it takes a lot of changes and brainstorming to get there.

What was your favorite HISD mural project and why?

My enthusiasm is reserved for future projects, but I am just happy to have made the clients happy and make everybody smile when they see them. I try to avoid the “usual” type of mural work at schools—the mascot clip art or plain signage. These can be done by anybody, and I try to do stuff people won’t get bored with.

On your website, you mention the challenge of transitioning to working full-time as an artist in 2009. What advice would you offer to students who dream of making a living in the art world?

Trust yourselves. Work hard. Be professional from day one. Be respectful. Be careful with your financial activities. Be yourselves.

You also mention being self-taught. How did you first get started in painting murals? How did you develop your craft, and how long did it take you to become satisfied with your work?

I was always involved with some kind of design and art work, though I never did it professionally. I painted some rooms and illustrated some books and cards—mostly for friends and family—but never thought I could present my skills and actually make a living. That changed when my husband and I came here, and we needed to find a solution to being independent in this country.

Detail of the mural in Wilson Montessori’s auditorium

I applied for an O1 visa, which is granted to athletes, actors, and artists, if they can prove they can make a living out of it. To my big surprise (and a minute later, horror…) I was granted that visa, and immediately started offering various services: graphic design, web design, illustrations, and murals. Apparently, I know what I am doing, because I keep getting more work, so I keep on going down this road, and learning something new every day.

What brought you to Houston from Israel?

My husband and I were both in that age where you know that if you wait a little longer to try something new it probably would never happen. We were 35, I was working in an office, he was working in agriculture, and we wanted to try new places, new people, new life, and maybe a new future.

I can’t say it was or is easy, but the journey has been amazing. Through that basic desire to try something else, we discovered a whole new world—of art, of murals, of public art.