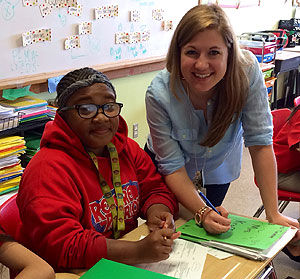 Erin Krafft with one of her students

There’s an old maxim that says “almost” only counts when playing horseshoes or throwing hand grenades. And that’s the same principle math teacher Erin Krafft lives by when demanding the best from her sixth-grade students at Revere Middle School.

Revere is one of 16 HISD middle schools whose teachers are employing author and education expert Doug Lemov’s Teach Like a Champion techniques in their classrooms, and one of Krafft’s favorites is called “100%.”

“Shortly after learning about the technique, I started reflecting on my own classroom practices,” explained Krafft. “And I realized that I often settle for less. I was sending a message to my students that it was all right for them not to complete a task, or at least, not to complete it to their best efforts.”

Krafft began raising her expectations and communicating them to her students, and after a few weeks, she noticed “a huge improvement” in the way her students behaved and learned.

“Even the simple task of asking students to put their hand in the air was difficult at the beginning” she added, “because I used to accept elbows bent, or hands not very high. And when I tried to get them to put their arm straight up proudly, it was like pulling teeth! After a few attempts and the occasional reminder (i.e. “Does your arm look like my arm?” or “Elbow to the ear”), 100% of the students are complying 100% correctly.”

Krafft noted that demanding compliance on something so trivial might seem unrelated to the overall purpose of education, “but teaching students to present their best selves all the time is a huge life lesson. Once I started holding students accountable, I saw a big difference in how they participated, worked and learned in my classroom.”