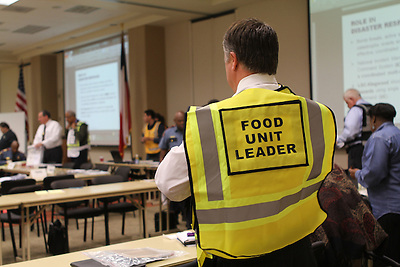 Houston ISD police and other staff from throughout various district departments converged Thursday, Nov. 29, to act out a mock emergency and experience the organization of an operations center during a time of crisis.

During the mock drill, a stolen truck containing a caustic substance was crashed into vehicles near the entrance to a school, causing a chemical leak that was later exacerbated by an explosion.

While police officers learned of chemical properties and wind patterns, financial and logistical staffers were figuring out how to gather any items needed to either evacuate students and residents or what equipment would be necessary to come to a quick resolution. Groups learned who would be in charge and what information was expected from them to make quick, safe decisions regarding the protection of students, staff, and residents.

“HISD is very progressive from the standpoint that they have emergency plans in place,” said Denise Walker, the chief emergency management officer of Lone Star College and the event’s designer and moderator. “It gives us an opportunity to work collaboratively with the community and the neighboring ISDs to fine-tune the plans that we have in place.”

Representatives from other school districts and government organizations were on hand to serve as sources or observers.

“We want to apply just enough pressure on people to help them understand that, in the real world, they don’t have an hour to analyze. You have to take the information you have and act accordingly,” Walker said.

The lead-up to the crash tested attendees’ listening and analytical skills, while they learned of tools and specific people who could easily assist them should a crisis occur.

“As they get into the event, they’re seeing everything come together,” Walker said. “This gives them a chance to play out how their role will be.”

Evaluations of the exercise will be analyzed and presented to HISD police administration in the next few weeks.