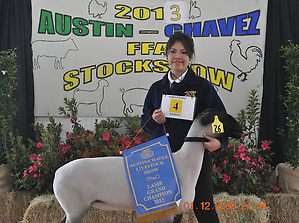 “This is a tremendous accomplishment that is owed to the hard work of our FFA (National Future Farmers Association) faculty sponsors, our students, sponsors and families involved on a day to day basis in the program,” Austin HS Principal Jorge Arredondo said.

More than 100 people registered as buyers and there were 12 major sponsors. More than 250 people, about 100 more people than the estimated 150 attendees in 2012, attended the auction.

“The proceeds from the auction are a tremendous benefit to the students and to the program overall, but what will stay with the students forever are the lessons in responsibility, consistency, and compassion learned via their individual projects.  FFA programs are a powerful way to impart lessons of leadership to our kids,” said Cecario Guerrero , the FFA faculty sponsor of the Austin HS program.

Grand and Reserve Champions, along with their total auction figures, include:

The top five sponsors of the auction and of the program include: