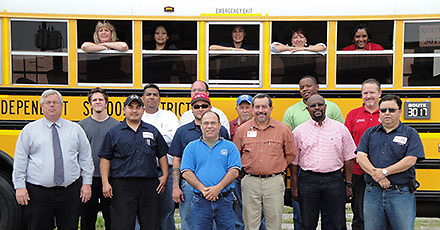 The National Association of Fleet Administrators awarded the Houston Independent School District its Excellence in Public Fleet Sustainability award for 2013.

“This award is a great recognition of the drive and determination of the entire transportation team, from the bus drivers who monitor engine idling, to the shop team members who reduce their waste stream,” HISD Transportation General Manager Nathan Graf said.  “Everyone in the department played an essential role in this award.”

This award is bestowed based on specific criteria such as documentation of key performance measurements which includes fleet composition of conventional fueled vehicles versus vehicles that use alternative fuels such as biodiesel and propane.  In 2011, HISD added 27 propane school buses to the fleet and since then an additional 58 propane buses and 20 propane vans entered into service.  This is part of HISD’s fleet plan to continue expanding the use of alternative fuels and hybrid vehicles when cost efficient.  Also, in 2010, HISD began using biodiesel fuel in all of its school buses and diesel light-fleet vehicles.

“I am extremely honored to work with such an outstanding team. HISD is committed to reducing idle time, increasing routing efficiencies, and using alternative fuels, and this helped us win this award,” said HISD Senior Manager of Fleet Operations Mark Swackhamer, who was also named by Green Fleet Magazine as one of the Substantiality All-Stars for 2012.

NAFA also considered employee involvement and supporting programs when granting this award.  Employee involvement initiatives are demonstrated by bus drivers who monitor engine idling and shop team members who recycle everything from batteries and oil filters to engine and transmission fluids.  In March 2011, the HISD Transportation Department had the unique opportunity to enter into a partnership program with the University of Houston to test a school bus filter that will convert smog-producing pollutants emitted from engines into water and nitrogen gas. HISD is the only district in Texas selected to partner with UH in this research project.

HISD was nominated for this award along with the Washington State Department of Transportation and the Port Authority of New York and New Jersey.

The Excellence in Public Fleet Sustainability Award adds to the list of honors earned by the HISD Transportation department, including the Top 40 Green Fleets and Top 100 Government Fleets for 2011 and 2012, as well as the National Pupil Transportation Association’s Larson Quality Award nomination.  HISD is the only school district to achieve all of these top honors.