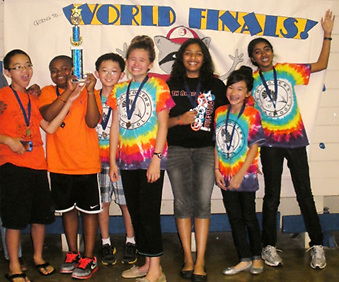 Nine HISD schools are competing in the Odyssey of the Mind World Finals in Michigan on May 22-25, 2013. For students at T.H. Rogers School, the trip to Michigan is an opportunity to reflect on all of their hard work.

“Making it to World was an achievement we never imagined; but we are very excited since we’ve been working at it since August and have put in hundreds of hours of prep and refinement,” said T.H. Rogers student Ceci Bruton. “I guess I’m proudest because we’ve done this all by ourselves!”

Odyssey of the Mind has become the largest international creative problem-solving competition worldwide, and HISD teams have been working hard on their projects and presentations since October. During the four-day World Finals, over 800 student teams from around the world will demonstrate their creativity, team-work, and problem-solving skills in front of a panel of judges.

“I love how over time the teams grow and develop together, putting so much time and effort in the team’s approach to the problem solution,” said T.H. Rogers Principal David Muzyka. “Those skills of knowing each other’s strengths and challenges play out well when we get to the improvisation. Kudos to the kids for those efforts and the fine guidance by their coaches and parents – we are so excited they’re heading to the World competition!”