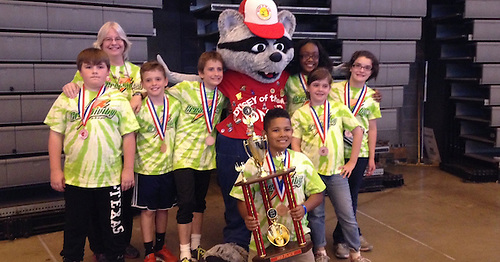 For the second year in a row, students from Walnut Bend Elementary School were honored at the Odyssey of the Mind World Finals for their outstanding performance and problem-solving skills. The team, along with eight other HISD schools, traveled to East Lansing, Mich., for the 34th annual World Finals held May 22-25.

Teamwork and creativity helped the Walnut Bend team earn third-place honors in the “Tumble-wood” category, in which students were required to “build a structure made of only balsa wood and glue that will balance and support as much weight as possible.” The Walnut Bend’s structure held an impressive 865 pounds.

“There are so many accomplishments through the months we have worked on the process. Most importantly, I want my kids to remember that all they have accomplished began as the spark of an idea that became better through the efforts of the team,” said Walnut Bend coach Michele Dahlquist, who has coached and coordinated the Odyssey of the Mind program for 30 years. “What was accomplished by these seven kids was far greater than anyone could have accomplished alone.“

With a project budget of only $145, the Walnut Bend team has been working hard since October with the goal of a repeat victory at the World Finals. Walnut Bend was one of more than 825 teams from around the world to participate in the annual competition, and 2013 marks the second year in a row that the team was awarded third-place place honors.

“Michele Dahlquist and her amazing students demonstrate that a little creativity and a lot of hard work can produce extraordinary results,” said Walnut Bend Principal Susan Shenker. “They serve as a beacon of what learning, at its very best, can be for all children.