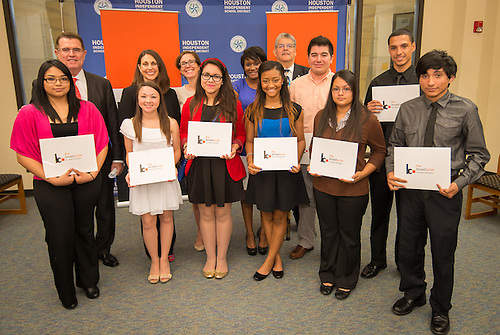 The Broad Foundation Scholarship winners. Click above to see more photos from the event.

Nine graduating seniors from HISD schools were awarded scholarships from The Eli and Edythe Broad Foundation at a news conference held during the organization’s second visit to Houston in two years.

“We’re so excited to be back in Houston for a second, consecutive year,” said Karen Denne, chief communications officer for The Broad Foundation. “We love coming back to districts that are repeat finalists because it means that their practices are working.”

The Houston Independent School District is one of four urban school districts in the running for the 2013 Broad Prize for Urban Education and for $550,000 in scholarships.

“You can’t believe how excited we are again this year,” said Superintendent of Schools Terry Grier. “The Broad Prize is the gold standard in public education. It’s the Nobel Prize.”

The students who were awarded the scholarships were chosen through Scholarships America. They all demonstrated a record of improving their grades over the course of their high school careers and have a financial need. Students attending a four-year institution received a $20,000 scholarship and students attending a two-year school received a $5,000 scholarship, which will be increased to $20,000 should they elect to attend a four-year college or university.

“Everyone here recognizes how far you’ve come and the tremendous progress you’ve made over the past four years,” Denne told the winning students. “We’re proud of you, but the work is still not done. We know that you will go on to good things.”

Denne added that even if the winning students delay their education, they will still receive their scholarships.

The Broad Foundation visited six campuses during its visit to Houston in the last week of May. Teams of researchers and practitioners also go through thousands of pages of documentation and speak to hundreds of people to help them make their decision.

The other school districts in the running for The Broad Prize are Cumberland County Public Schools in North Carolina, the Corona-Norco Unified School District in California, and the San Diego Unified School District in California. The winner will be announced on Sept. 25. School districts cannot apply for or be nominated for the prize. A review board chooses four finalists each year.

The Eli and Edythe Broad Foundation is a national education philanthropy based in Los Angeles. The foundation seeks to ensure that every student in an urban public school has the opportunity to succeed. The award honors school districts that demonstrate the greatest overall performance and improvement in student achievement in the nation while reducing income and ethnic gaps.

“(The Broads) realized there is so much focus on what’s wrong in public schools and they wanted to shine a spotlight on what’s working,” Denne said.

HISD won the inaugural Broad Prize for Urban Education in 2002.

You can watch the entire news conference, including the scholarship giveaway, below.