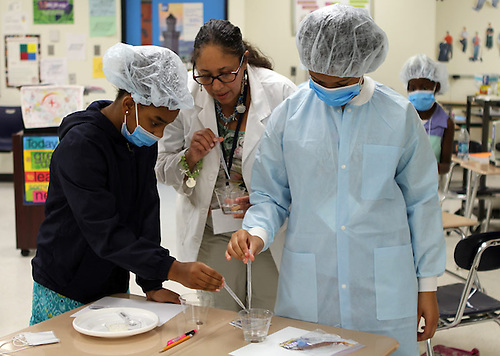 Approximately 100 students in the inaugural class of the Baylor College of Medicine Academy at Ryan are spending part of their summer vacation becoming acclimated to their teachers and course load.

The sixth-grade students are taking classes in math, science, art, reading, and more among the summer school students at DeBakey High School, which is housing the Academy students until their facility is ready later this summer.

“The goal also is to have them here to bond with each other,” said Jyoti Malhan, principal of the Baylor College of Medicine Academy at Ryan. “It’s a great time for the kids to be comfortable, to understand the expectations on the campus.”

It’s not only students who are learning more about their future teachers, but educators learning about their students.
[vimeo https://vimeo.com/68668906 width=”600px” height=”330px”] “It lets us see how mature these kids are,” said English teacher Maria Garrett. “Even if they are sixth-graders, there are very mature in their knowledge and what they know so far. They’re excited about what they’re about to learn at the Academy. It means a lot to us… we’re excited about these students.”

Assisting the BCM teachers are students from DeBakey High School, who are spending their time in the classroom helping to guide and even teach lessons to their sixth-grade counterparts.

“(The DeBakey students) are great,” Garrett said. “If I know that my sixth-graders will eventually become these DeBakey students that we’re working with, then I’ll be a very proud teacher.”

Earlier this month, a parent-teacher meeting also attended by students was filled to capacity, Malhan said, to better inform parents of the upcoming curriculum and to help finalize the school’s branding. After a vote from those in attendance, the BCM Academy decided upon…

Malhan said the fact that the meeting was standing-room only is a good sign about the future of one of the district’s newest schools. She hopes to make this an annual event and already has a second two-week camp planned for later this summer that is expected to include about 150 students.

Malhan said she had a bit of apprehension about the school’s success in attracting students and teachers since being named to the post weeks ago, but those fears were quickly allayed when she saw children, parents, and teachers eagerly awaiting the start of the camp and the new school year.

“I don’t have words to describe how empowering that was,” she said. “To see more parents than you can ever expect is the most empowering thing for me… that’s the amount of trust and faith that my parents have in me.”

Students at the camp have been given a novel called “Code Orange,” which combines elements of science, history, and more as part of their instruction. Malhan said the students have been reading the book constantly since they got it—more proof that they are eager to learn.

The students also have two field trips—one to the Johnson Space Center and another to the Houston Museum of Natural Science—to enhance their learning outside of the classroom, Malhan said.

“It is one of the best camps that I have been a part of as an administrator or a teacher,” she said. “We’ve put lots of hard work into this, and the kids are really having a productive time.”