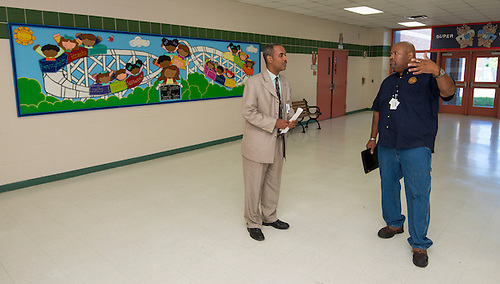 “We are getting ready to welcome a new class of four-year-olds to our campus,” said Dr. Agnew-Borders, who previously served as the principal of Wesley Elementary School. She is interviewing teachers, meeting parents who show up to enroll their children, picking Formica, and generally directing the re-purposing of the school.

“I am impressed by the teamwork that HISD has displayed in getting all these workers in place,” Dr. Agnew-Borders said. At 10:30 a.m. on Mon., July 1, 2013, the halls were filled with people with paint swatches, rug samples, tools, and other materials to be used in getting Fonwood ready for the 2013–2014 school year.

Richard Martinez, supervisor and team leader of construction at Fonwood, has contractors lined up waiting for instructions. “We will be going full-blast for two weeks,” he said. “Then we will move on to the next school.”

Darrell K. Wilson, a manager in Environmental Consulting Risk Management for HISD, is here to ensure that everything is safe for workers and will be conducive to student learning. “It’s crazy,” he said. “Everybody is giving orders, everybody is taking orders.”

Principal Agnew-Borders is also working on the upcoming Fonwood Enrollment Fair, which is scheduled for Sat., July 13, from 10 a.m. until 4 p.m. at the Northeast Multi-Service Center (9720 Spaulding, 77016). In addition to registering their children for school, parents can also have them immunized for free.

Meanwhile, a few miles away, North Forest High School is preparing for summer school to start on Mon., July 8. Principal Pam Farinas is meeting with members of her staff, including assistant principals, the head counselor, and a Title I specialist. Although they still don’t have Internet service, they are moving forward.

“This is the work we signed up for, and after being here this morning, we know that we are in the right place,” said Farinas.

After a brief stint as deputy head of schools at KIPP Schools, Farinas returned to Team HISD as the principal of the Gregory Lincoln Education Center, where she increased test scores dramatically, before taking on leadership of North Forest High School.

Outside the main office, workers are hammering and sanding in the counselors’ office, and a team of custodians has fanned out around the school to wipe down desks, mop, and get the school ready for students in just under a week.

To enroll a child in a former North Forest ISD campus, visit that particular school on any Wednesday this summer between 8 a.m. and 4:30 p.m.

See more photos from the transition below.