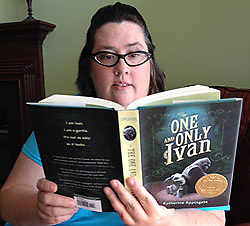 Browning ES librarian Danielle Norris reads The One and Only Ivan, written by Katherine Applegate and illustrated by Castelao.

HISD’s Millionaire Club is a literacy initiative designed to encourage students to read for pleasure during the summer months. Each week, we’ll catch up with one HISD librarian to find out what’s on his or her reading list. This week, we spoke with Danielle Norris, a librarian at Browning Elementary School.

Wow, really? How far have you gotten?

I’m almost halfway through the list. I’ve read nine of the 20. Right now, I’m on The One and Only Ivan, which was also a Newbery Award winner.

What’s been your favorite so far?

Now see, that’s really a tough one. I think there are two. One is called Balloons Over Broadway by Melissa Sweet, and it’s about the person who started the hot air balloons that became so popular in the Macy’s Thanksgiving Day parade. That made me cry and get a little choked. The other one is called Jangles by David Shannon. They’re both picture books, but I really liked them.

What prompted you to read all these children’s books?

I tend to gravitate toward children’s books. I find I can connect with students better when I’ve read the same books that we’re expecting them to read. And I’ve had a few wonderful “aha!” moments because of that.

One book I read on some of my students’ recommendation, and I started bawling at the end and just could not stop crying. When I told them that, they looked at me strangely and said, “Well, we didn’t.” And I said, “You know what the difference is? My mom’s no longer with me. She’s not living.” And they said, “Yeah, if we’d lost our moms, we probably would have cried, too.” And we started talking about how what we bring to the table affects how we perceive what we read. By doing this, I put myself in a position to have more of those moments.

Can I ask what’s on your adult roster?

I have several mysteries on my Kindle: Wife with No Breaks by Nick Spalding, and a bunch by J. A. Konrath named after adult drinks, like Whiskey Sour, Rusty Nail, and Fuzzy Navel. The protagonist’s name in that series is Jack Daniels, so I think that’s where they got the idea.

What is your campus doing to encourage students to read over the summer?

We’ve worked hard to make Accelerated Reader a very big deal, and we opened up a session so they could take tests over the summer. We’re going to have a recognition ceremony during the first week of school in August. The students are very excited, because they love to hear their names called out on the announcements. I also told them, “Look, if you take the tests online, then that is your Millionaire Club record. You don’t have to keep up a separate list on a little piece of paper.” Because if they get zero right, then I’ll know they didn’t read the book. But if they get seven or eight or whatever, then I’ll know that they did.