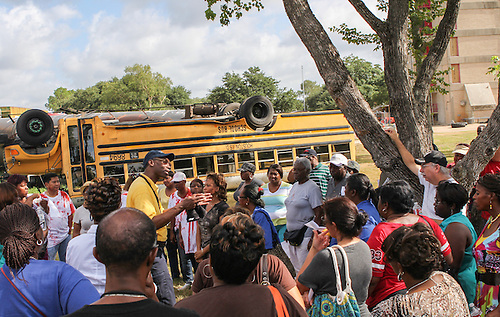 The derailed train and overturned school bus may have looked like a scene out of a disaster movie, but it actually was part of a very real hands-on training exercise for HISD’s Transportation Services Department.

Nearly 1,200 HISD bus drivers and attendants took part in the mock emergency drill this week at the Houston Fire Department training facility. The emergency and rescue training prepared them for a variety of potential scenarios, including a fire on a school bus, an armed intruder on board, and a wreck involving a train.

”Our drivers are really enjoying it,” said trainer Pete Medrano. “It’s always a little different every year, and they always learn something new that will help them keep our students safe.”

Drivers also trained on how to use a silent panic alarm, which has been added to all HISD school buses. HISD is one of the first public-school districts in the nation to offer the feature. The silent alarm can be used by a driver to alert dispatch in the event of a life-threatening situation. Unlike the visible bus radio used to notify dispatch, the silent alarm is discreetly activated by the driver.

In May 2012, the HISD Transportation Department was nominated as one of two districts in the nation for the prestigious Larson Quality Award, which spotlights school-bus operations that provide high-quality customer service in safety-centered operations. HISD has also ranked as one of the “100 Best Fleets” nationwide consecutively over the last three years. Each day, about 875 HISD school buses travel 80,000 miles, as they transport 30,000 students to and from school.