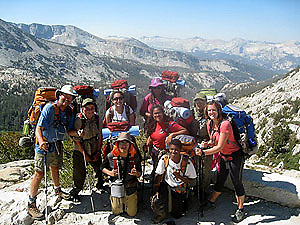 For a few weeks every summer, The Woods Project shutters its Houston-based office while the entire staff goes backpacking with local teenagers.

At first glance, this might not seem to be a very effective business strategy, but the trips are actually aligned with the non-profit organization’s mission—getting economically disadvantaged urban youth out into the wilderness. The idea is to build their self-confidence by exposing them to unfamiliar people, environments, and challenges, and along the way, teach them the value of teamwork, the need for perseverance, and the reality they can accomplish far more than they ever thought possible.

“We work with kids from the third percentile on down to the 60th,” explained The Woods Project founder and director Steve Rosencranz. “We don’t just work with the top kids in each class. Too much focus is on them already. We want to work with the kids who before may not have gone to college but now will go to HCC, or before were planning to go to UH and now want to go to Rice. These trips show kids, ‘Hey, I am not a loser. I can win, and I can work hard and be successful at things I didn’t know I could do.”

The Woods Project takes approximately 140 teenagers on two-week excursions each summer to some of the most scenic and unspoiled areas in the nation, including Yosemite National Park in California and Glacier National Park in Montana. About a third of those students come from HISD schools, including Lee, Milby, Reagan, Sharpstown, and Westside high schools, as well as Sharpstown International.

“One of the things kids need to learn to do is function with people they don’t know, so we mix them up,” said Rosencranz. “We also take away their cell phones and iPods, which is almost more scary for the parents than the kids. Probably the hardest thing they do is the five-night backpack trip. They hike about 30 miles carrying a 40-pound pack, and Mom and Dad aren’t there to help them.”

Kenneth Andrus, who will be a sophomore at Milby High School this fall, said he feels more confident, social, and helpful after his trip to Yosemite this summer.

“It helped me overcome a lot of things,” he said, “even my fear of heights. On our first hike without our backpacks, we went to climb the Lembert Dome. I didn’t want to go all the way to the top, but after a while, seeing how amazing the views were, I just realized I wasn’t afraid anymore.”

APPLY NOW: The Woods Project currently has openings for four more schools to join the program this fall. Acceptance is contingent on a commitment from both participating students and their campuses to contribute/raise part of the funds for the trips.

For more information, please visit The Woods Project website or watch the video below.