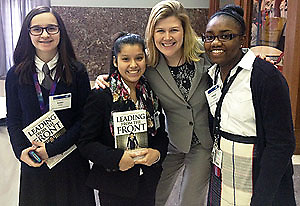 Five girls from HISD’s Energy Institute High School got to speak with a best-selling author, learn from female leaders in the energy industry, and network with other industry professionals on Feb. 11, 2014, after becoming the first students ever to participate in Baker Hughes’ annual Diversity and Inclusion Summit.

Students Kaleigh Davis, Amber Farias, Giselle Guevara, Nancy Mastache, and Rose Moreno were selected to attend the event after some of their classmates made a very favorable impression on company representatives during a facility tour that took place last summer in The Woodlands.

“The organization was so impressed with the way our students represented themselves and the school that they decided to invite a few students to attend for the first time ever,” explained Energy Institute Dean of Students Noelle MacGregor.

The invitation was limited to female students, since the summit was coordinated by the North American Women’s Resource Group (an organization within Baker Hughes), and women are still under-represented in many STEM-based industries.

While at the summit, the students heard from former U.S. Marine Captain and best-selling author Courtney Lynch and received autographed copies of her book, “Leading From the Front.” They also attended a breakout session on the subject of the power of language, and Davis was commended by its moderator for having the courage to ask a question when many of the company’s own employees were too shy to do so.

“I loved hearing the professionals talk about how they enjoyed working for Baker Hughes,” said Davis. “I can’t believe I met and shook hands with Courtney Lynch. What an unbelievable experience!”

To learn more about how HISD is striving to introduce students to potential careers at an early age, please see this related article on Linked Learning.