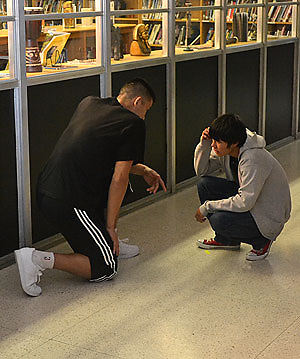 Klo Lay Pla, a student at HISD’s Westbury High School, is working with National Basketball Association star Jeremy Lin to share a story of hope with the masses.

The film tells the story of a 12-year-old Burmese refugee who overcomes language and cultural barriers with the help of a mentor, who works hard to communicate with him.

Pla plays the refugee and Lin plays the mentor in the film, which is being produced by the Jubilee Project, whose mission is to create entertaining content that will empower, enable, and inspire others to do good as well.

The movie was shot at Fondren because the school has a partnership with a non-profit organization called Partnership for the Advancement and Immersion of Refugees (PAIR), which Lin supports.