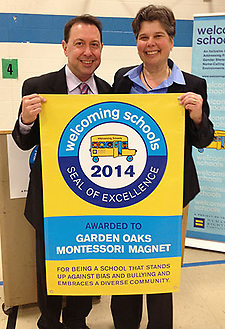 When Principal Lindsey Pollock was approached by a group of parents last year with concerns about some of the other families at Garden Oaks Montessori, she said, “Gosh, I’m going to have to do something about that.”

But instead of encouraging their intolerance, she brought the Human Rights Campaign Foundation’s (HRC) Welcoming Schools program to the campus, which takes a comprehensive approach to bullying prevention and creating a safe and supportive environment at elementary schools. Its approach is lesbian, gay, bisexual, and transgender (LGBT) inclusive and creates school climates that welcome all family structures and all students.

“The impetus for us was that we had a group of parents who were really intolerant of families that looked different than everybody else,” explained Pollock. “This program teaches us how to respect and value diversity in all people. It’s not just about tolerating, but embracing everyone. When we create safe spaces for all people, we’re all the better for it. Nobody has to hide. And that’s just better for everybody.”

Now, Garden Oaks is one of only 10 schools in the nation to be recognized for its use of the program. It received the inaugural Welcoming Schools Seal of Excellence during a special awards ceremony held at Garden Oaks Elementary on May 2.

“Schools should be places where all students feel welcomed by their peers and adults,” said Kim Westheimer, director of the HRC Foundation’s Welcoming Schools program.  “But far too often, students who are perceived as being different face harassment and bullying. Most teachers want to create an environment where every student is safe and to know how to intervene when conflict arises. Welcoming Schools helps them do just that.  The schools we’re honoring…have demonstrated a deep commitment to all students and families and have worked with us over time to create inclusive climates where all students can thrive.”

“This is bigger than promoting a peaceful school environment,” noted Pollock. “It’s about not tolerating unkind behavior from anyone, for any reason. It’s also about being an ally, so when you see something happening, you have the words and the mindset to step in. It prepares our children, our teachers, and our parents to do the right thing.”

Pollock noted that of the eight families who initially pulled their children out of the school in response to the program, about half of them have already come back.

“One parent told me when she returned that she re-enrolled her child after doing some hard thinking and soul searching. She realized her feelings were not coming from a place of love, but of fear,” said Pollock. “And this program isn’t about sex. That’s where I think a lot of people get hung up. They say, ‘Oh my God, are you teaching sex?’ No. It’s just making sure that everybody has a place at the table. It’s not okay to be mean to people. Period. That’s the bottom line. We promote peace and kindness, to all families.”