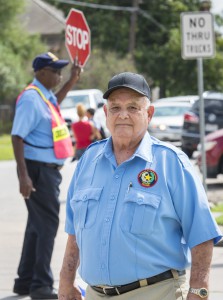 Keeping HISD students safe as they walk or bicycle to school daily cross busy streets is the top priority for crossing guards throughout the district, including for veteran crossing guard Raul Valdez. Named “Crossing Guard of the Year” for 2014 by the Houston Independent School District Police Department, Valdez’s professionalism and dedication to the safety of students, parents, staff and community members didn’t go unnoticed by his supervisors and peers who nominated him for the honor.

When did you first start working for the district?

Back in 2003, I started working at HISD. Right now, I have 22 schools that I supervise.

How do you handle all of those schools on a normal basis and how do you decide which campus to go to each day?

[The guards that I supervise] never know which location I’m going to be at — always got to keep them on their toes.

Wow, that’s a lot of campuses. What do you enjoy most about being a crossing guard?

I am in a position to help the children cross the streets in a safe manner. For me, that’s the bottom line — the safety of the children.

How did you feel when you found out that you would be honored by HISD PD as “Crossing Guard of the Year”?

I didn’t know [about the award] until the day before. I couldn’t believe it because we have close to 700 crossing guards in the district. At the time, we were short of supervisors and team leaders. I was given the task of mentoring and working between 35 schools after taking on North Forest schools.

What would you say is the most fulfilling part about serving as a crossing guard?

I would say what fulfills me is knowing that every day, the children are safe.