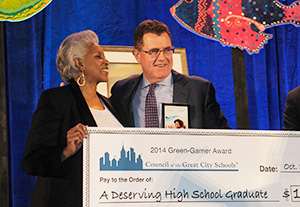 The Council of the Great City Schools awarded Houston Independent School District Superintendent Terry Grier the 2014 Urban Educator of the Year award Thursday in Milwaukee during its annual fall conference.

“Superintendent Terry Grier knows how to confront challenges in urban education and has the commitment, experience, and energy to overcome the odds to provide a quality education for students,” said Casserly.

The award is given to a school leader who demonstrates success in the areas of leadership and governance, has been instrumental in improving student achievement districtwide, improved the public’s confidence in his or her school district, and who embodies professionalism and has been involved in the council.

“This is a team award that once again demonstrates that our principals, teachers and staff have done a phenomenal job of carrying out the vision set forth by the HISD Board of Education,” said Dr. Grier.

Under Grier’s leadership, the district’s dropout rate is down 44 percentage points, with vast improvement among Hispanic and African-American students, who have seen decreases of 54 percent and 31 percent respectively.

“Dr. Grier has moved the needle on education in HISD in a huge way; from financial awards to recognitions, which translate to improved teaching and learning for our students. HISD is a stronger district with him at the helm, promoting higher levels of achievement for everyone.” said Board Member Greg Meyers.

In addition to the recognition, Grier will receive a $10,000 college scholarship to present to a student.

The Urban Educator of the Year award alternates every other year between a superintendent and a school board member. It is given in honor of Richard R. Green, the first African-American chancellor of the New York City school system, and Edward Garner, who served on the Denver school board.

4 thoughts on “Grier named national Educator of the Year”