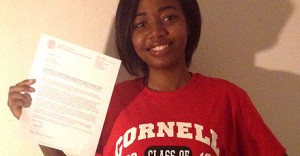 Lamar senior Tyra Jenkins poses with the acceptance letter she received from Cornell University. Cornell is her dream school, and she plans to attend it in the fall.

Graduating seniors are starting to discover where their quest for higher education will take them this fall, as colleges and universities across the country are sending out letters of acceptance to those who applied for admission early. 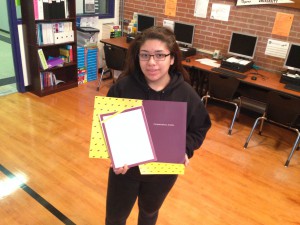 “Early decision is where you apply to your top school, and if you get accepted, you have to go there,” explained Assistant Superintendent of College Readiness Rick Cruz. “But early action is not as binding, so you can wait and see where else you got in before deciding.”

Cruz emphasized that it’s still not too late to apply for college admission, and doing so sooner rather than later has many advantages, including less anxiety for students, and greater opportunities for financial aid. 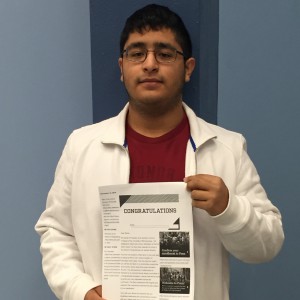 Eastwood Academy senior Martin Araiza holds up his college acceptance letter to the University of Pennsylvania.

“Many colleges still have deadlines coming up or rolling admissions,” said Cruz. “So students really should take advantage of those opportunities. And those who have already applied really need to be applying for financial aid now, because the sooner they complete the Free Application for Federal Student Aid (FAFSA), the more likely they are to get aid, or more aid.”

The district will hold its second annual FAFSA Day on February 19 to help students and their families complete the application that will determine if a student qualifies for grants, loans, and work-study funds for college.