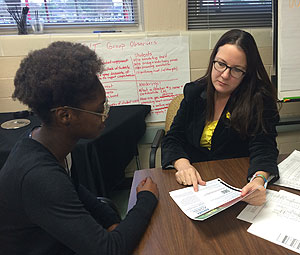 National School Counselor Week runs from Feb. 2–6 this year, and HISD encourages students and parents to take time out to express their appreciation of these hard-working professionals.

The role of the school counselor has evolved quite a bit in the wake of House Bill 5, which began requiring freshmen to identify their areas of interest this school year so that they could choose a high school with the endorsement they desired.

“The main thing that’s happening is school counselors are doing a lot more guidance in terms of leading kids to careers and post-secondary options,” said Furr High School Dean of Students Tiphaine Shaw. “It’s about connecting them with their goals a lot earlier, so that instead of just recruiting kids to come to our campus, with the new career pathways, we’re showing them how coming to our school would connect them with their future.”

Shaw describes the change as “a big shift, but really good. It’s a better use of a counselor’s time.”

“Another neat thing is that as kids go through the endorsement requirement, we’re putting them in a logical sequence of things, so they can go deeper and deeper into their areas of interest,” she said. “Before, students would have a lot of ‘intro to this’ or ‘intro to that’ on their transcripts, and it was nothing that was ever building on anything. Now, if kids have a deep interest in something, they can be almost immersed in it by the time they’re ready to graduate.”