Lamar High School football player Holton Hill will be in Washington, D.C. on Feb. 21, 2015, to receive this year’s Franklin D. Watkins Memorial Award. He is one of only five high school athletes nationwide to be so honored this year by the National Alliance of African American Athletes. 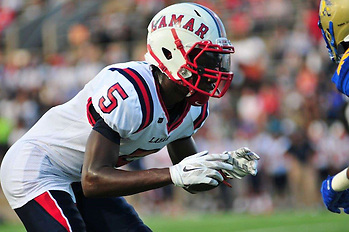 The Watkins Award has been presented to African American scholar-athletes since 1992. Finalists are chosen based on their unweighted grade point average, their personal statements, extracurricular activities, community service and letters of recommendation.

Hill committed to playing football at the University of Texas during this year’s National Signing Day on Feb. 4. He is a member of the National Honor Society with a 3.5 GPA, and he has also been named the Nike Opening Defensive Most Valuable Player and the Houston Chronicle‘s All-Greater Houston Defensive Player of the Year. He was also listed in the Honorable Mention section of the the 2015 Parade All-America Team in the Feb. 1 edition of Parade magazine.