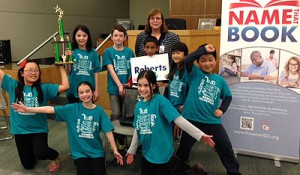 HISD finished another chapter of its annual Name That Book contest in 2015, as Library Services held the finals for grades 9–12 at the Hattie Mae White Educational Support Center on Friday, April 10.

Due to the sheer volume of participants at the lower elementary level, final competitions were held at three different times (morning, mid-day, and afternoon) on three consecutive days in late March, resulting in nine first-, second-, and third-place winners each for grades K-2. Those schools are listed below:

To see more photos from the competitions, please visit the Library Services website.