Switching careers can be a daunting decision, and Natalie Nelson knows first-hand how difficult that transition can be. 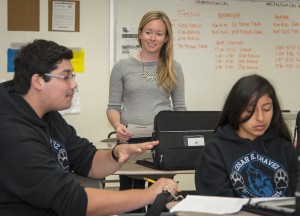 Natalie Nelson worked as a political researcher and an advocate for juvenile justice reform before joining HISD as a teacher a Chávez High School in 2013.

The Advanced Placement government and economics teacher at Chávez High School chronicled her experiences as a first-year teacher in 2013–2014 in an HISD blog called 177 Days, and recently, she reflected on finishing her second year in HISD.

“In my first year, I was stressed primarily about my own time management,” she said.“How I could possibly find enough time to plan lessons, develop assessments, make copies, grade papers,and fulfill my coaching responsibilities. This year, it was more of a focus on the content I was teaching: What is the best way to teach this material?”

Nelson’s unique career path began as a political researcher after graduating from the University of Texas at Austin. She then obtained her law degree from Pepperdine University and spend a year as an advocate for juvenile justice reform. When her fellowship was over, she decided to enter a field where she could help prevent youth from ending up in those facilities. Nelson received her teaching certification after going through HISD’s Effective Teacher Fellowship, the district’s alternative certification program.

“Just because something turns out to be difficult, it doesn’t mean it’s not worth doing,” she said.“I enjoy teaching for the most part; just at times there are a lot of pressures and stresses put on teachers outside of the classroom. In my classroom, things are great, and I feel good about what I do, and that’s the most important part of teaching.”

Nelson attributes her success as a novice teacher to taking the time to develop meaningful connections with her students.

“A lot of student learning is rooted in failure,” she said.“Often, students fail first before they understand a concept. But failure can be scary. For kids to be willing to try and take the risk of failing, they need to trust you and be comfortable in your classroom. So you have to get to know your students if you want them to be really successful.”

“Teaching in HISD is about so much more than test scores or grades,” Nelson added. “Our students need so much more from us than a lesson on the whiteboard. It certainly makes the job more challenging than in another district, but it also makes it that much more fulfilling.”