Houston Independent School District students are earning significantly more college credit through Advanced Placement exams now than they have in the past six years, according to 2014-2015 data released by the College Board.

This year, 8,294 exams given to HISD high school students were scored high enough to q 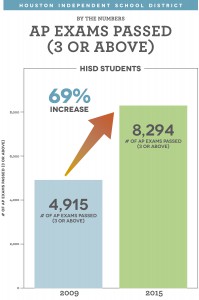 More students than ever before are taking Advanced Placement exams. Last year, HISD high school students took 25,147 exams — more than double the number taken in 2009. The jump equates to a 117 percent increase.

“This is such a great accomplishment, not just for our Advanced Placement students, but also for the AP teachers who are working every day to make sure their students are successful,” HISD Superintendent Terry Grier said. “These dedicated and hardworking students will have a tremendous leg up when they graduate.”

The numbers are also up when looking at the number of exams qualifying for college credit. Almost 500 more exams were scored high enough to qualify for college credit in the 2014-2015 school year when compared with the 2013-2014 school year. That’s a six percent increase.

Dr. Grier long has been a proponent of the Advanced Placement program, which provides students with the opportunity to take college-level courses and earn college credit while still in high school. The program, which Grier has expanded every year, is a key component of the district’s efforts to continue strengthen 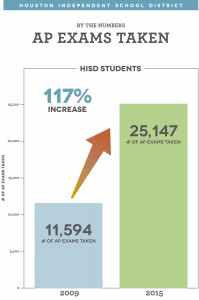 ing academic rigor in classrooms across the district and make sure all students graduate college and career ready.

AP offers a total of 36 exams in seven subjects, and HISD administered all 36 of the exams during the 2014-2015 school year. HISD covers the fees for all exams to ensure all students have an equal opportunity to earn college credit.

In addition to making the tests more accessible to all students, HISD also places a strong emphasis on individual success. Last year, the district began studying Advanced Placement potential data, which is provided by the College Board and uses PSAT scores to determine how likely various students are to score a 3 or higher on different AP exams.

District officials also used that same data to identify the strongest AP teachers. These teachers were then called upon to revamp the AP curriculum and train their counterparts.