In this week’s I Am HISD, which features district students, graduates, employees, and other team members, returning volunteer Sharon Plummer discusses how she and her husband first discovered the Read Houston Read program, why they both immediately signed up to participate, and why they can’t wait for this year’s first mentoring sessions to begin. 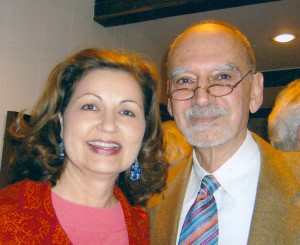 I understand you and your husband, Chandler Davidson, both volunteer as reading mentors at Burnet Elementary School through Read Houston Read. How did that arrangement come about?

We had actually been looking for an opportunity to read to elementary students for quite some time. Maybe even a couple of years. We had made several inquiries with various organizations, but just could not find a good fit. Then I happened to see this. And I thought, “Oh, my gosh, this is it!”

What is it about reading to young children than appeals to you?

Well, we’re grandparents, and we loved reading to our grandchildren. We also both feel that reading is the key to advancement in life. My husband is a retired professor from Rice who has been involved in race relations and political sociology. I am a semi-retired mosaic artist who worked as a manager with ExxonMobil for 18 years, so we both have a lot of real-world experience. And we have both been concerned with the classism in our society and feel that education is the key to equalizing those opportunities.

Was there any particular reason why you chose Burnet?

We live very close to Twain Elementary, but we felt like most of the students there already are very privileged, so that was not the type of opportunity we were looking for.

Tell me about your experiences with Read Houston Read so far. I hear that you helped one of your mentees obtain corrective lenses. True?

Yes. That was little Louis. He started out as being extremely hyperactive. My husband was reading with him, and he had difficulty focusing. He didn’t really want to read; he wanted to do the fun activities that followed. My husband really struggled with getting him to calm down. Then we decided to trade-off students, and as I was working with him, I noticed that while he was trying to pick out letters, he would get really close to the book. And I thought, “Well, no wonder he can’t read. He can’t see.”

The next week, he came to school with glasses on, and then the following week, no glasses. By then, I knew that he had a vision difficulty, so I couldn’t figure out what was going on. I started getting really concerned. I talked to a coordinator and asked if we could be put in touch with his parents, because we had decided that whatever it takes, we are getting him glasses. It turns out he had broken his, and his mother could not afford to replace them. The insurance would only pay for one pair per year. So we took him to another optometrist. And it turns out his vision is 20/400, so he’s legally blind. The optometrist said that the correction was going to be so dramatic that he wasn’t even going to give him the full prescription, because he’d have such a headache, it wouldn’t work.”

I imagine that finally having the right prescription glasses made quite a difference to your reading sessions with Louis.

Well, we took him to the optometrist once school was out, so we didn’t get a chance to see, but his mother was so excited, she sent us a note. She said Louis is loving his glasses and thanks so much. We’re both so eager to see him again.

So, you plan to return to Burnet and work with the same children as you did before?

Oh, yes. We had already made that request before we learned HISD was letting people do that this year, so we were thrilled that that was going to work out. We became very close to all of our students: Louis, Oscar, Simone, and Angel. Our first reading session is Tuesday, Oct. 13.

Is volunteering through Read Houston Read something you would encourage other people to do?

Oh, yes. I keep trying to recruit people, encouraging them to get involved. We’ve recruited at least one of our friends. We tell them that after each reading session, we’re not sure who enjoyed it more, the kids or us. It’s just a really, really nice experience.