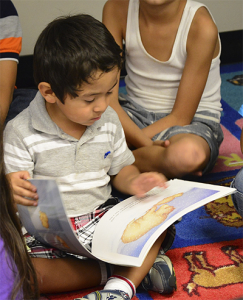 Brookline Elementary School is on a quest to upgrade its campus library, and the “Books for Bobcats” kickoff it held on Oct. 26 has already received a boost from an anonymous donor, who promised to match up to $50,000 — or half of the campaign’s stated $100,000 goal.

“This person is a college friend of one of the faculty who has been very successful in the corporate world,” said Brookline teacher and capital campaign director Theodore Wills. “He has been a generous benefactor to public libraries and many other causes.”

Wills noted that Brookline devotes its resources to improving student achievement in math and reading each school year. This year, campus leaders determined that updating the library collection was critical to preparing students to be successful global graduates, so Brookline is devoting its entire library budget to the purchase of new STEM-focused (science, technology, engineering, and math) books.

“We have a very limited budget for new library books that meet the backgrounds and interests of our population,” added Wills. “We also urgently need a significant number of bilingual and Spanish titles. Ideally, the capital campaign will last until we raise our part of the donor’s $50,000 grant.”