Editor’s Note: Black History Month runs from Monday, Feb. 1, through Monday, Feb. 29, this year, and HISD is celebrating with a series of weekly stories recognizing distinguished African Americans who graduated from district high schools. This first article focuses on alumni who went on to have successful athletic careers. Others will spotlight artists, educators, legislators, and those with careers in radio, TV, and film. 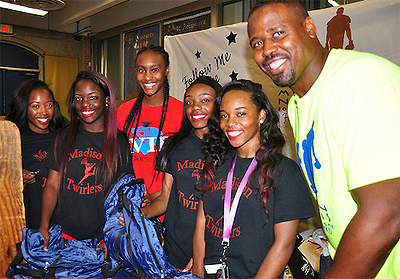 HISD alumnus Moran Norris regularly gives back to the schools he attended, including Madison High School (pictured). Here, he is distributing backpacks to incoming freshmen during the fall 2015 orientation.

From Wimbledon finalist and Olympic gold-medalist Zina Garrison (Sterling, Class of 1982) to National Basketball Association Rookie of the Year and Olympic bronze-medalist Chukwuemeka Noubuisi “Emeka” Okafor (Bellaire, 2001), HISD has produced dozens of African-American graduates who have gone on to enjoy impressive careers in professional sports.

Garrison, who skipped her own graduation ceremony to play at the French Open, called her time at Sterling High School “a great experience” that helped her become the person she is today.

“Because of the aviation program, Sterling was a little off the charts even back then, in terms of diversity,” she explained. “Now, I feel like I can relate to and interact with anybody.”

The tennis star also appreciated the support she received from teachers. “They would encourage me and make sure I had my work ahead of time,” said Garrison. “Everybody there touched my life in some way, even my homemaking teacher, who taught me how to sew. Now, if I’m in Paris and my hem comes undone, I’m like, ‘Oh, I know how to do this!’”

Former Houston Texans fullback Moran Norris (1996) and former Tennessee Titans quarterback Vince Young (2002) remember their time at Madison High School fondly, too. They held their former head coach Ray Seals in such high regard that they jointly nominated him for National Football League High School Football Coach of the Year, which he was awarded in 2008.

Norris called Coach Seals, now retired, “a great inspiration,” adding “even though I grew up with two parents, he was like another father. He always guided me right and it wasn’t always about football. He wants you to be successful in life.”

Young, meanwhile, remembered Coach Seals as “a great coach who truly has a passion not only for the sport, but for the community he coaches in, the school, and the players.”