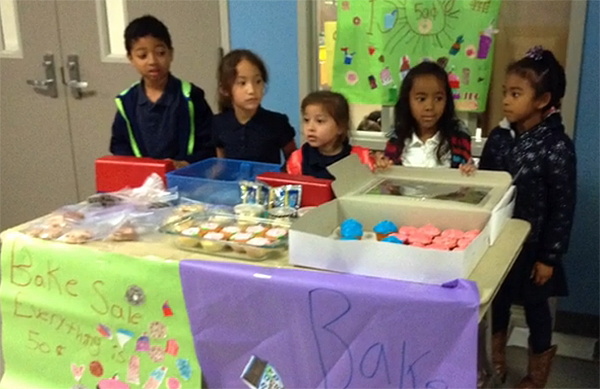 Two Cambodian amputees are now enjoying a better quality of life due to increased mobility, after students at HISD’s Briarmeadow Charter School completed a project that provided them with new prostheses.

Hea Yoeung, who lost her lower left leg in a motorcycle accident, and Dork Savorn, who lost his lower right leg after stepping on a landmine during a soccer game, both have new artificial limbs, thanks to a donation of $600 from the school’s first-graders. The students raised the money during a single bake sale, after learning about the needs of amputees around the world.

“The founder of LIMBS International gave a short presentation during a meeting I attended,” explained Briarmeadow International Baccalaureate coordinator Saundra Mouton. “Our first-graders were just starting a unit of inquiry on needs and wants, so it seemed like a great fit for a lesson. They watched videos, read books, and had class discussions about how losing a limb can have a devastating effect on someone’s ability to provide for the needs of their family. It made a really big impression.”

Even though the students doubled their original goal of raising $300, Mouton noted that the real reward came when the school received biographies of the individuals who had benefited from the students’ donation.

“Our action made an impact on the guy, and I can’t believe we did that in first grade, because we are kind of little,” said student Abdulwahab Aknakkash.

“I was really proud that all of the hard work we did helped somebody,” added classmate Abhigya Neupane.

Watch a video about the project here.