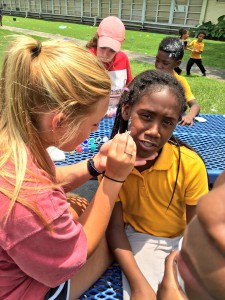 Camp counselors from Camp Fuge celebrated the end of their three-week program with a summer party at Codwell Elementary on Wednesday, June 29, 2016.

The heat and humidity wasn’t about to slow down students at Codwell Elementary. They had earned this party. As summer school was nearing its end, students gathered for an afternoon celebration with their new friends, a group of middle, high, and college students from Fuge Camp, who spent the past three weeks tutoring and mentoring them.

Kristy Love, principal at Codwell, said she was amazed how quickly bonds developed between her students and the camp counselors.

“We’re a ‘Leader in Me’ campus, and one of the principles we follow is, ‘Working together, and together is better,’” Love said. “It’s been crazy to see the benefits. These are kids who don’t have a lot of communication with people from other backgrounds. So it’s been great to see them develop these relationships.”

The three-week program was the result of a partnership between Houston-based Push To Win Outreach and Fuge Camps, a faith-based national organization which pairs youth volunteers with communities that need extra help. This summer was the first time Codwell has hosted the volunteers, but both sides said they want to continue and expand the partnership.

“It’s been a great experience,” said Kristy Seely, an art teacher from West Memphis, Ark., who brought the Fuge Camp to Codwell. “Seeing those connections with the students and how precious it is, it’s been really rewarding.”

Jean Gabriel, founder of Push To Win Outreach, said she picked Codwell because her four daughters all attended the school when they were younger and have gone on to lead successful lives.

“I know what can happen when kids have a good foundation,” she said. “I found out there was a need for us to be here, and (Fuge Camp) has been such a blessing to the students.”