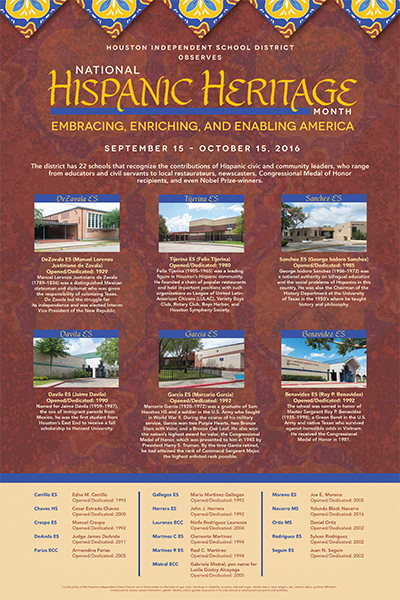 The Houston Independent School District is observing Hispanic Heritage Month, which kicks off today and runs through Oct. 15, by honoring the Hispanics for whom many of the district’s schools are named.

Half a dozen schools will be highlighted each week on the HISD website (see below for the first six).

Hispanic Heritage Month begins on Sept. 15, because it is the anniversary of the 1821 independence of Costa Rica, El Salvador, Guatemala, Honduras and Nicaragua. The month also includes the independence days for Mexico (Sept. 16) and Chile (Sept. 18), as well as Columbus Day (Oct. 12).

Throughout the month, a variety of events showcasing performances, music festivals, food tastings, art shows, and many other displays of the rich Hispanic cultures takes place in schools across the district.

Hispanic Heritage Month was just a week long when it was first established by President Lyndon Johnson in 1968, but President Ronald Reagan extended it to a month in 1988.

Take a look below to learn more about HISD Hispanic school namesakes.

Benavídez ES — This school, which opened in 1992, was named in honor of Master Sergeant Roy P. Benavídez (1935–1998), a Green Beret in the U.S. Army and native Texan who survived against incredible odds in Vietnam. He received the Congressional Medal of Honor in 1981.

Carrillo ES — Edna M. Carrillo Elementary is located on the site of the former Parker Memorial Methodist Church, previously known as the Sims Estate. Built in 1993, the school was named after Edna Moreno Carrillo, one of Houston’s most innovative educators. She pioneered the “open concept” model classroom and served as principal of Benjamin Franklin ES from 1972 until her death in 1975. For more information, see this page on the Carrillo Elementary School website.

Chavez HS — César Estrada Chávez (1927-1993) was an American labor leader and civil rights activist who, with his wife, Dolores Huerta, co-founded the National Farm Workers Association, later the United Farm Works, in 1962, a union for migrant farm workers. The school named after him opened in August 2000. For an extensive biography, see this page on the Chavez High School website.

Crespo ES — Manuel Crespo (1903–1989) was a native of Spain who moved to America following the death of his father when he was 16. He settled in Houston in 1923 and became the city’s first Hispanic police officer in 1940. Crespo also cofounded Chapter #60 of the League of United Latin-American Citizens (LULAC) and ran a funeral home on Navigation Street for more than 50 years. The school named for him opened on the city’s southeast side in January 1992.

Davila ES — Named for Jaime Dávila, the son of immigrant parents from Mexico, the school opened in August 1990, not far from the site on which Dávila was born in 1959. Dávila was a product of HISD and the first student from Houston’s East End to receive a full scholarship to Harvard University.

DeAnda ES — This school, which opened in the fall of 2011, was designed to provide relief for overcrowded conditions at nearby Mitchell ES. It was named for the late Judge James DeAnda, Houston native and graduate of Davis HS. DeAnda was one of the first Mexican-American attorneys to argue before the Supreme Court and the second Mexican American to serve as a federal judge.