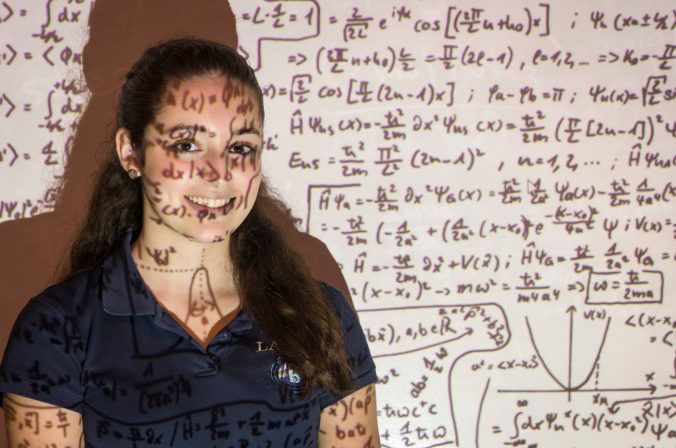 Nicole Mut turned quantum physics into something anyone can understand, making her one of 15 finalists in a global contest. HISD is exposing students to STEM at all levels and offering STEM-focused programs at magnet schools and public charters, pathway schools, and through 23 TIF 4 grant schools.

As far back as she can remember, Nicole Mut has been interested in science. Her parents, both engineers, wove science and engineering topics into everyday activities. Family vacations were often spent in national parks, where Nicole’s dad would explain about animals or the environment, and discussions often dealt with the reasons behind why things are the way they are.

Nicole’s passion for all things STEM was further nurtured by enthusiastic teachers with whom she felt a personal connection. She remembers her seventh-grade science teacher explaining course material in ways that made the lesson seem like an adventure. Her fifth-grade teacher made a strong impact when she encouraged Nicole to participate in a STEM contest where she explored turning algae into biofuel.

“It inspired me at a young age to think that anyone could participate in adult-level topics, regardless of age, gender, race, or anything,” Nicole said. “I learned that an interest in learning can enrich your life.”

Now a sophomore at Lamar High, Nicole’s passion for science led her to create and submit a video in the 2016 Breakthrough Junior Challenge competition. The annual global contest inspires students to think creatively about complex math and science topics and communicate them in an engaging and imaginative way.

“Quantum physics sounds intimidating and scary, but actually it’s a very interesting theoretical topic that explains a lot of things around us,” Nicole said. “I watched a lot of videos and read a ton so that I learned it at a higher level. Then I cut it down to what was really important and taught it the way I would want to learn it.”

Nicole’s video was chosen as one of 15 finalists worldwide, from more than 6,000 entries submitted from 140 countries. She plans to enter the contest again next year and eventually become an engineer like her parents.