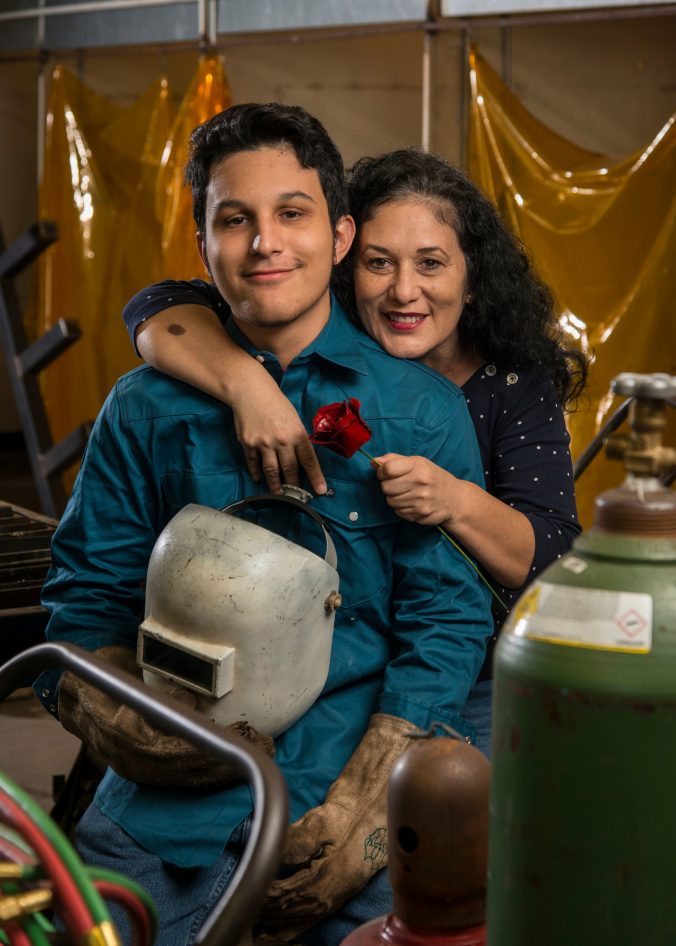 Victor Rodriguez inspired his classmates to create 16 metal roses in just three days — and he gave one of them to his mother, Rosa. CTE programs like welding at Milby, along with eight Futures Academies and 14 CTE workforce level I certificate programs, are helping HISD graduates fill jobs in some of Houston’s most high-demand industries.

When a popular Milby High welding project, completed each year by the senior class, was in jeopardy of not getting off the ground, the instructor knew he could count on Victor Rodriguez to get things rolling again.

A junior at the time, Victor had the leadership skills to rally his classmates to complete 16 metal roses for Valentine’s Day in three days — a record for the class.

Working to become a leader has been important to Victor since the third grade, when he asked his mother if he could one day attend Stevenson Middle School to participate in the Kickstart Kids karate program there.

Through that program and its instructor, Derek Gutierrez, Victor said he gained confidence and social skills that have helped him to continue his path at Milby, which is renowned for its CTE program in welding.

“He’s taught me so much — how to make my own decisions and how to be a leader to other children around me and my friends, and basically pushing me to do better in anything I do,” he said. “He’s taught me honesty, discipline, respect, inner strength, and everything you need to be a good citizen.”

The next step for Victor will be following in his father’s footsteps to become a welder. He has been accepted to San Jacinto College in Pasadena, where he will get further certification and his associates degree.