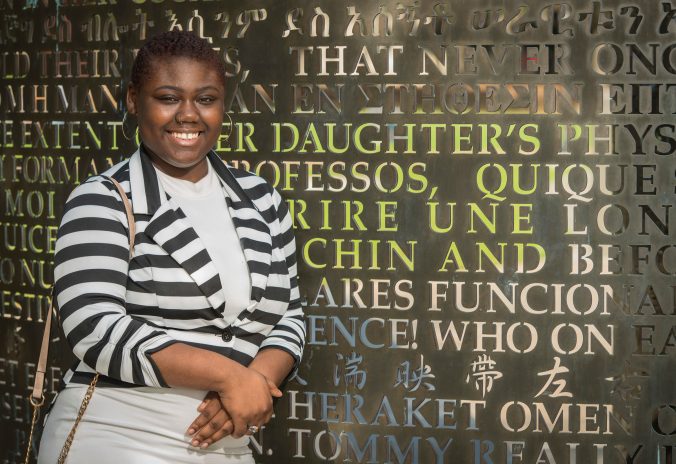 Ty-Rinetta Sanders-Washington is one of 58 seniors from 27 HISD high schools who pledged to return to the district to teach as part of Teach Forward Houston. The grow-your-own program is training a new generation of HISD teachers who have a personal connection to the district that gave them the foundation they needed.

Ty-Rinetta Sanders-Washington knew she wanted to enter a profession where she could help people.

“I looked at going into physical therapy, being a motivational speaker … I just wanted to impact lives,” Ty-Rinetta said.

Then a counselor at Booker T. Washington High told her about Teach Forward Houston, an innovative fellowship program that is training the next generation of HISD teachers.

Now Ty-Rinetta is enrolled at the University of Houston, working toward an education degree and teaching certification. HISD is subsidizing her tuition, and she has agreed to return to the district to teach in a high-needs school.

Ty-Rinetta knows firsthand the value of an effective teacher. She recalls two astute educators who took her under their wing when she was having difficulties at home.

“They weren’t just my teachers, they were a second set of parents. They didn’t baby me. They would tell me when I was slacking, but they were still nurturing. They were giving me the support I was not getting at home,” Ty-Rinetta said. “It was such a big thing for me. It allowed me to move forward not just with academics but as a young woman.”

The impact of those teachers stuck with Ty-Rinetta, and she wants to positively influence students’ lives the way hers has been.

“I personally feel like HISD is one of the districts where you want to be,” Ty-Rinetta said. “There are close-knit communities within the schools. I feel like I can be an asset to HISD. I know I can’t do it alone, but I want to be there to help. I want to give back to HISD the way that they helped me.”