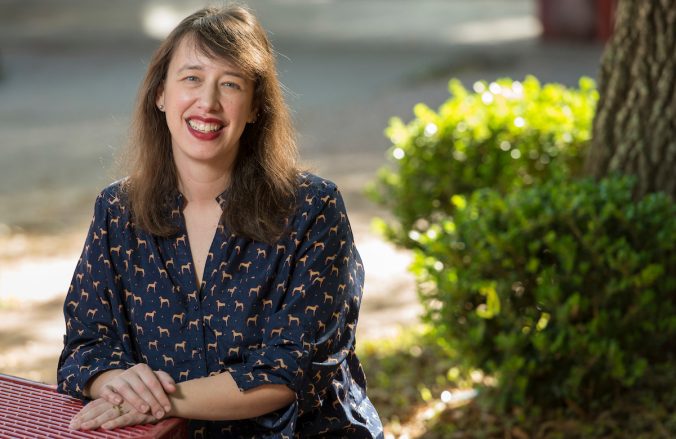 Bellaire High School English teacher Jennifer Blessington’s fourth young adult novel, “Moxie,” caught the attention of Amy Poehler, and her production company, Paper Kite, has acquired the film rights. Poehler, 45, is an actress, comedian, director, producer, and writer. She was a cast member of “Saturday Night Live“ from 2001-2008 and the star of “Parks and Recreation“ from 2009-2015. Roaring Brook Press will publish “Moxie” on Sept. 19. Jennifer publishes her novels under the name Jennifer Mathieu.

What grade do you teach?

How long have you been teaching?

I am currently in my 12th year in the classroom.

When did you publish your first book?

My first book, “The Truth About Alice,” was published in the summer of 2014.

How did that happen?

It was a long road. I started writing young adult literature after I became a teacher in 2005. I was teaching seventh grade English at Meyerland Middle School, and out of curiosity I started reading some of the YA [young adult] books my students were reading. A lifelong reader and writer, I decided I wanted to give it a try! I wrote two novels that were good enough to get me a literary agent, but they never sold. Finally, “The Truth About Alice” did find a home. The wait was worth it!  I always say I have the two best jobs in the world – teaching teenagers and writing for them, too.

When did you get a film agent? Have you sold the film rights to any of your other books?

I was put in touch with my film agent via my literary agent. They had a working relationship, and my literary agent thought this particular film agent would be interested in “Moxie.”  She was right! There has been some film interest in my first book, but nothing has really come of it. Perhaps one day.

I understand that you spoke with Amy Poehler on the phone. What was that like?

Honestly, after I got off the phone I started crying because I was so excited. She has been a hero of mine for so long. I loved her on “SNL,” I adored her on “Parks and Rec,” I loved when she hosted the Golden Globes, and her memoir “Yes, Please” is such a fun, honest read. Once, I even used her essay that appeared in The New Yorker in one of my lessons. For all the Amy fans out there, I can tell you she is as genuine, warm, funny, and smart as she seems on television and in films. Even though I was nervous, she was so easy to talk to, and she said such lovely stuff about my book. Being able to speak with her on the phone and have her say such nice words about my art – when I have been admiring her art for years – will go down as one of the best moments of my life.

What is “Moxie” about?

“Moxie” tells the story of an underground army of teenage girls who take on the sexist culture of their small-town Texas high school.  The main character is a young woman named Vivian Carter who gets fed up with hallway harassment, dress codes that are implemented unfairly, and an administration that looks the other way. Inspired by her mom’s Riot Grrrl past, Vivian creates a little homemade magazine – or “zine” as they’re called – and she titles it “Moxie.”  She distributes copies anonymously in the bathrooms of her school, and soon a movement is born. But as “Moxie” catches fire, the administration of the high school starts fighting back, and Vivian and the Moxie girls have to make some tough decisions.

What is main message of your book?

Well, first I hope that readers simply enjoy Vivian’s story and the story of the Moxie girls. I think it’s a really fun read! Ultimately, I hope young readers – especially young women readers – are inspired to stand up for gender equality and for the rights of women and girls.

How autobiographical is your novel?

In some ways Vivian reminds me a bit of myself in high school. Like Vivian I was starting to be interested in feminism at that time, but like Vivian I also worried a lot about fitting in and not making waves. So I think there’s a little bit of wish fulfillment there – perhaps Vivian is living the high school life I wish I’d had the guts to live. In addition, “Moxie” is autobiographical in that when I got to college in 1994, I became really interested in Riot Grrrl music and punk in general, so a lot of the bands and artists I mention in the book are some of my personal favorites. In my twenties, I also created a zine called “Jennifer.” It makes me laugh that I ever had the free time to do that!

It seems that the subject matter is particularly timely, given the controversy surrounding Donald Trump’s presidency and the women’s marches.

Yes, it does seem weirdly timely which, in my opinion, is pretty depressing. Personally, I believe that gender equality shouldn’t be a partisan issue. I think good, decent people from across the political spectrum should speak out against language that degrades women and actions that disrespect women.  It concerns me that young women and men, including those I teach, would think that just because certain men in power say or do certain sexist things that somehow makes those words and actions normal or okay. They aren’t and they never will be.

5 thoughts on “I am HISD: Bellaire teacher’s book will likely become a movie ”