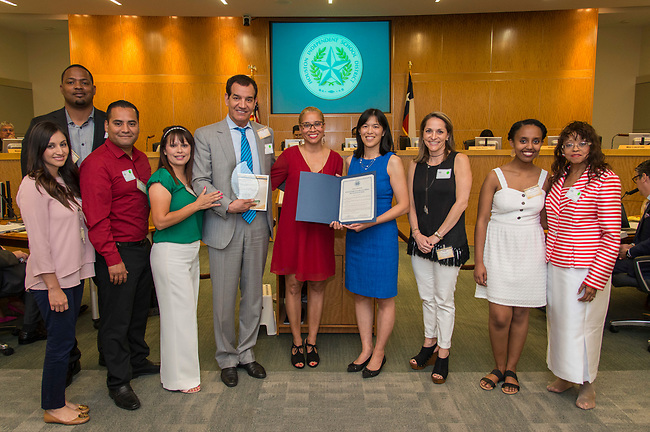 The theme of this year’s reception is “Volunteers are Key in HISD.” Volunteers were nominated for awards in four different categories. Winners were selected from 12 finalists.

First launched in 1970, VIPS now has more than 35,000 volunteers district-wide who have dedicated countless hours to schools, programs, and events across Houston.

This year’s award recipients are:

ABC Dental brightens the smiles of HISD students in four elementary schools. The company has volunteered in HISD schools for more than six years. ABC Dental provides free dental exams for HISD students and dental hygiene information for the entire family and community. The company also sponsors annual events at the school campuses such as annual fall festivals and health fairs. The schools have reported that children are less likely to be absent due to dental problems because they are provided with preventive care and routine annual exams. Dr. Iraj Jabbary, the company’s leading dentist, along with the entire staff at ABC Dental are a huge asset to HISD schools and their surrounding communities.

Westbury High School parent Demetris Bert has been a loyal volunteer at Westbury for the last four years. Mama Bert, as she is affectionately called by her Westbury family, has assumed almost every role imaginable at the school. She is also a PTO officer and member, fundraiser, chaperone, and band mom.

She has raised money for every spring field trip that the school band has taken for the last three years. She has traveled with the school band as a chaperone to San Antonio, the Pro Football Hall of Fame in Canton, Ohio, and Walt Disney World. She has even show her school support by creating and selling decorated candy gifts boxes as a school fundraiser.

Tracy Agnich is a standout volunteer worthy of recognition for her leadership and dedication to Bellaire High School. She has been a member of the PTO board for more than five years and currently serves on the Teacher Grant Committee and as the Vice President of Fund Raising. She’s assisted with the Mr. Bellaire Pageant fundraiser which helped to offset senior year activity fees, allowing all seniors to participate. She set high expectations for herself, as well as her own children who have attended and still attend Bellaire. She has served as a Bellaire board member, booster club mom, fundraiser, and a major supporter and organizer of the annual Mr. Bellaire Pageant.

Rebecca Alemayehu has volunteered at Bellaire High School for four years. Over that time, she has made a significant impact on her fellow students and the overall student body. She is the founder of the school’s Ambassador Program created for multilingual students that are new to this country and the school.  She has recruited student volunteers for the program by pairing them up with a newcomer to help with their adjustment to a new environment. She also tutors for the Italian Honor Society; participates in cultural awareness events through the East African Student Association; raises monies for the annual UNICEF campaign, and organizes an annual food drive for the Houston Food Bank.

For more information about VIPS or to volunteer, go to www.houstonisd.org/VIPS