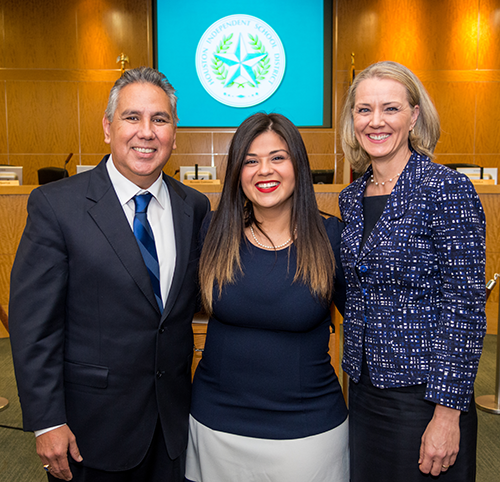 The ceremony was attended by many elected officials, including State Senator Sylvia Garcia; State Representatives Ana Hernandez, Gene Wu, Armando Walle, and Ron Reynolds; Justice of the Peace Jo Ann Delgado, and former County Commissioner Gene Locke. Senator Garcia thanked the HISD trustees and presented them with a proclamation passed in the Texas Senate recognizing their ongoing hard work. The state representatives also recognized and thanked the board.

Trustee Santos was sworn in by Senator Garcia. “I will need your ideas, your observations, your opinions, and your support to make the dream we voted for a reality,” Santos said. She is a native Houstonian and a product of HISD, attending Janowski and Herrera elementary schools, Burbank Middle School, and Sam Houston Math, Science and Technology Center. She is a graduate of the University of Houston-Downtown and has spent the last 10 years as a teacher at Sam Houston and Northside High School.

Trustee Deigaard was sworn in by former State Representative Scott Hochberg. “I sought to serve on this board for each and every child in our district,” she said. “They are the foundation of our amazing city, and they deserve the foundation to be strong so they can soar.” Deigaard attended public schools in Illinois and graduated from Rice University with a bachelor’s degrees in English and flute performance. She has worked as an educational advocate for over 20 years.

Trustee Sung was sworn in by Gene Wu. A Bellaire High School and Harvard University graduate, she was a Teach for America corps member who focused on physics, teaching at Wisdom High School. Among her many accomplishment is cofounding Community Voices for Public Education.

Trustee Vilaseca was sworn in by Senator Garcia. A product of Ohio public schools with degrees from the University of Michigan and Columbia University, she was appointed to the Board of Education in January of 2017 to complete Greg Meyers’ unexpired term. Vilaseca has worked as a bilingual and dual-language educator in both HISD and area charter schools.

And finally, President Adams was sworn in by Judge Delgado, who is a longtime supporter and friend. Adams has served as board president for the past year, and during her final hours in that position, she thanked her family, her friends, and the team that has been with her for 10 years. “As long as we stay together and work together, we will be victorious,” Adams said. She is a graduate of Kashmere High School and Texas Southern University and has served in public office for 10 years.

In closing, Superintendent Carranza congratulated all the new and re-elected trustees. “Thank you in advance for your service, and let’s make sure every student is treated not only equally but equitably in our system so they get what they need to be successful.”