Some 20 HISD schools are participating in the 31st annual Art Car Parade, which lines up along Allen Parkway on Saturday, April 14, and rolls out at 2 p.m. into downtown Houston.

For those who want to get jump on the parade, see the cars up close, and talk to the owners, join the “Starting Line Party” along Allen Parkway between Montrose and Sabine Street Bridge at 11 a.m. There will be food trucks, music, beverages, and more.

Nearly 250 cars, bikes, skaters, and motorized creations take about two hours to wind through the streets of Houston and end up back along Allen Parkway. For the parade route and complete details, see Houston Art Car Parade.

Rebecca Bass at Heights High School is working on her 29th art car. Last year’s tribute to Prince won the Mayor’s Cup, and this year the car titled “It’s Only Rock and Roll, But I Like It” will be dedicated to the Rolling Stones. 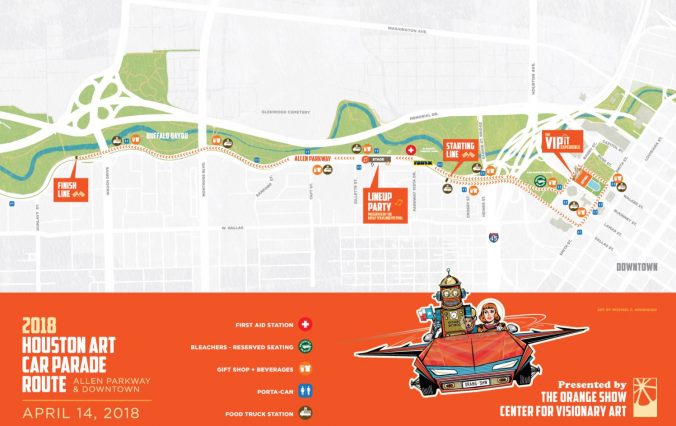 Frank Black Middle School, which won last year’s top student-created car, is entering two cars this year. Baylor College of Medicine at Rusk is collaborating with Medical Bridges, which works to bridge the healthcare gap worldwide by procuring and distributing medical equipment and supplies to underserved communities. Lovett Elementary loaned their art car from last year to Rusk. Sam Houston MSTC is working on a limousine.

Carnegie Vanguard High School has received an environmental grant and their art car, “Plastic Pollution,” will promote saving the environment. Kashmere Gardens Elementary and Kashmere and Barbara Jordan high schools are working together on their entry. Pershing Middle is teaming up with a 24-hour emergency health services provider on a white Mercedes. Arabic Immersion Magnet School (AIMS) is expanding on the school’s owl mascot-themed car from last year.

Here is a list of participating HISD schools, including the names and numbers of their art cars, as of press time:

In 1991 a small group of art cars staged an improptu convoy of cars on the Thursday before the parade. Now called the “Main Street Drag,” it has grown as far as number of cars participating and number of locations visited.

This year, three different processions will visit eight HISD schools between 9:20 a.m. and noon on Thursday, April 12. The schedule is as follows: