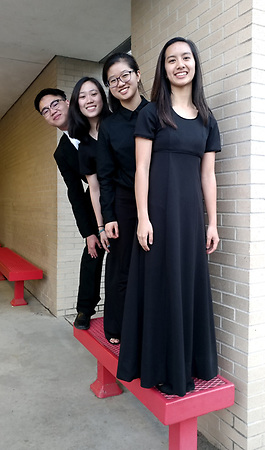 When the touring show Beatles vs. Stones – A Musical Showdown comes to the Hobby Center on May 20, the Houston Bellaire High School String Quartet will have the privilege of joining the professional musicians on stage to add some orchestral texture to the evening. The show pits Rolling Stones tribute band Satisfaction against rival Brit boys Abbey Road in an all-out musical showdown for rock dominance. The Bellaire string quartet will perform seven songs with the bands.

There is one show only, at 7 p.m. on Sunday, May 20, in Zilkha Hall at the Hobby Center for the Performing Arts. Tickets are $44-$64, but HISD friends and family members can receive a 20% discount with the promo code “Fab4.” The code will be accepted over the phone, online, and at walk up. Tickets may be purchased by calling 713.315.2525, at the Box Office, or online at www.thehobbycenter.org. The 500 seats will likely sell out in advance of the show, which is appropriate for all ages.

The producers of Beatles vs. Stones approached Bellaire High School Orchestra Director Laurette Reynosa looking for a talented ensemble that could hold its own with a rock band in front of an audience. Bellaire senior Emily Pan and juniors Dorothy Zhan, Jesse Ji, and Chloe Trinh will join the bands for the songs “Eleanor Rigby,” “Yesterday,” “A Day in the Life,” “Hello Goodbye,” “Hey Jude,” “As Tears Go By,” and “Ruby Tuesday.”

Emily Pan, 18, has been playing violin for 12 years. She performed with the All-Region Orchestra for four years and the All-State Orchestra for three years. Pan, who is president of the Bellaire orchestra program, plans to attend a four-year university and study science.

Chloe Trinh, 16, began playing the cello when she was 10. She competed in a UIL Solo and Ensemble competition and received a Superior rating. When she is not playing music, Trinh performs with her dance troop and volunteers for Students without Borders.

Jesse Ji, 17, has been playing viola for a year after making the transfer from violin. Li has performed with the Houston Youth Orchestra and the Texas All-State Orchestra. He is a member of National Honor Society, Mu Alpha Theta, and German National Honor Society. He plans on working in the field of medical research but would still like to keep music in his life.

Dorothy Zhan, 17, has been playing violin since she was seven and has played with the Houston Youth Orchestra. Zhan is involved in her school dance company, where she choreographs dances to accompany the orchestra. She started the Free the Captive club, which combats Houston human trafficking. Zhan plans on studying health care management in college.

The production includes multimedia, period costumes and vintage instruments. It is part of a 125-city tour of the U.S., Canada, and Australia.