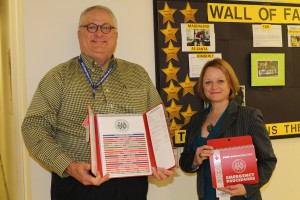 END_OF_DOCUMENT_TOKEN_TO_BE_REPLACED

Houston Independent School District Superintendent Terry Grier today introduced a new breakfast and lunch initiative with the HISD Police Department. Dr. Grier made the announcement during his visit to Billy Reagan K-8 Educational Center to kick off the first day of classes for the 2012-2013 academic year.

River Oaks Chrysler Jeep Dodge Ram President Alan Helfman initially approached HISD Police Chief Jimmy L. Dotson about the idea and is pleased the program is becoming a reality. “I have been passionate about this idea for several years and I’m pleased that it is finally coming to fruition. It’s wonderful that the officers will have another way to serve as role models and mentors for our children,” said Helfman.

Chief Dotson believes the officers’ presence will also boost the sense of security at HISD campuses. “The Houston ISD Police Department is committed to keeping our students safe and this new innovative program will provide a unique opportunity for our officers to continue to protect our campuses while reaching out to the students” said Dotson.

Dr. Grier also invited law enforcement officers from the many agencies operating within HISD to grab lunch or breakfast inside the schools in the neighborhoods they serve. “In HISD we are committed to providing every child with a rigorous education in a safe environment. Children learn best when they have been fed a nutritious meal and when they feel safe,” said Grier.

The Crime Stoppers Safe School program is also lending its support to the new initiative. The program will be funded by the HISD Police Association.