About 35 people attended a community meeting on Thursday night at Young Men’s College Preparatory Academy to discuss construction plans for the fifth ward school under the $1.89 billion bond program. 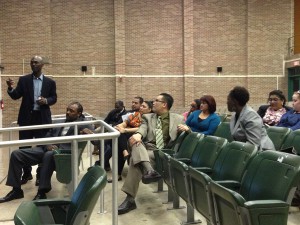 The 2012 bond program approved by voters in November will build or renovate 40 schools across the district, including 29 high schools.

School Board Trustee Rhonda Skillern-Jones led the discussion, which emphasized community involvement and a need for a facility that reflects the school’s curriculum.

“We want to make sure the academic program (at YMCPA) is sustained by the building,” Skillern-Jones said. “We need 21st century buildings for that.”

The school, formerly E. O. Smith Education Center, was transformed into an all-male college preparatory academy in 2011. Principal Dameion Crook said 260 students are currently enrolled at the school, with 460 projected next year. The school currently serves grades 6-7 and 9-10. Subsequent grades will be added until the school serves grades 6-12. The first graduating class will walk across the stage in 2015.

Crook said the school’s Project Advisory Team, made up of community members, parents, students and staff, is forming now to help guide the planning process for the 2012 bond project.

Learn more about serving on a Project Advisory Team

Teachers at the school, many of whom requested to be consulted on what to buy for classrooms, expressed the need for distance learning classes, computer labs, and a counseling center.

Parents added to the wish list of items, suggesting multi-functional spaces, a gym, and a library with advanced technology.

“What’s imperative is that we look forward,” parent Reginald Adams said. “The whole idea of building a new campus is very forward thinking.”

YMCPA is in the first group of 17 schools slated for construction, all of which are planned for groundbreakings by the end of 2014. All of the other schools will be phased in over the next five years with all construction under way by 2017. The district’s goal is to finish all work by 2020.