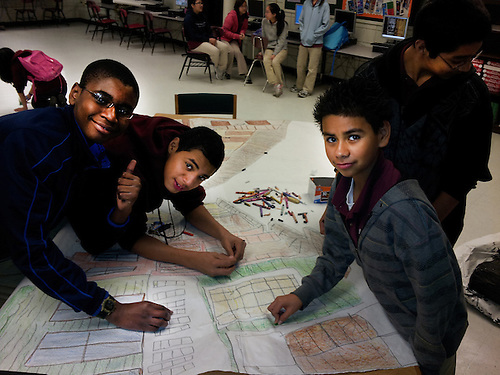 Students from 12 HISD schools will compete in the state Odyssey of the Mind competition on April 13.

For students at Sharpstown International School, the excitement of advancing past the regional competition is particularly meaningful as 2013 marks their second year of participation and back-to-back wins.

Under the supervision of Sharpstown technology teacher Krisztina Pazmandi, two Division II and three Division III teams won at the regional competition. The Division II teams, comprised of 6th-8th grade students, won for building a balsa wood structure weighing less than 15 grams and creating a structure that is a technical representation of sending messages via email.

“It was awesome. I didn’t think we were going to win,” said Sharpstown sixth grader Delani Kelley who is hoping to advance to the world Odyssey of the Mind competition in May. “We’ve been preparing all year, and we want to win!”

Beginning in the fall, Sharpstown students began brainstorming and collaborating for the regional competition. They selected long-term problems to solve, wrote scripts for the humorous skits performed at the competition and, with a budget of $145, designed props out of materials such as foil, scrap wood, and butcher paper.

“It’s an applied class, and everything they learn in every subject can be brought in here: art, math, science, English, writing,” said Pazmandi. “They are the ones driving the class. They take ownership in their own learning.”

“Odyssey of the Mind teaches 21st century problem-solving creativity skills and long-life skills students need regardless of demographics or socio-economic status,” explained Sharpstown International School Dean of Students Alice Reuter. “The students are driving their own learning, and it’s problem-based learning at its best.”

Learn more about Odyssey of the Mind.