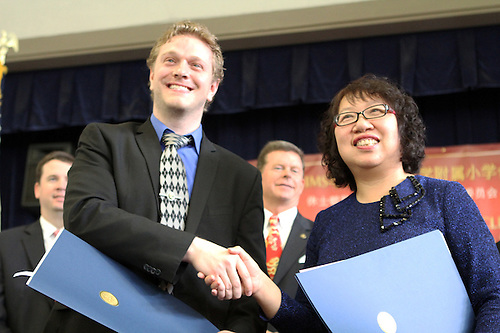 Bryan Bordelon (L) and Zheng Ruifang, shake hands after the signing of a Sister School agreement between their campuses.

Students at HISD’s Mandarin Chinese Language Immersion Magnet School (MCLIMS) may soon be completing their projects with more than just their classmates a few desks over.

MCLIMS and The Elementary School Affiliated to Renmin University of China officially entered into a Sister Schools agreement on April 16, marked by a ceremony at the Bellaire area school. The partnership will enable students and teachers from both countries to share ideas and further develop language instruction in both English and Chinese, using technological resources to increase communication.

“One of the things I’m most excited about is the possibility of doing student and teacher exchanges, because I think that’s where both schools will benefit the most as we learn, explore and grow as schools,” said Bryan Bordelon, principal of MCLIMS. “In the immediate future, a big part of that is going to be electronic, long-distance learning. Setting up pen pals, or Skype pals, or something like that, so that our students have a tangible connection to China beyond just this bubble of Chinese immersion in Houston.”

Board of Education Trustee Harvin Moore stressed that MCLIMS students can look forward to lessons taught with the help of Chinese instructors and work on projects with their classmates halfway around the world, adding that their Chinese counterparts are excited to reciprocate the instruction and ideas from their American counterparts.

“They point out to us that their kids need more critical thinking skills, they need more creativity, they need to be able to work in groups. One of the things they get out of these partnerships is to improve their system by some of the ways that we do things very well,” Moore said.

Moore, who has a child at the Mandarin Chinese Language Immersion Magnet School, noted that MCLIMS is a popular magnet school in the district, having received far more applications than spots available. He also noted the capacity for more students will increase as the school has its new facility built with funds from the 2012 Houston Schools Bond, passed by nearly 70 percent of voters last year.

“We truly believe that the future of our cooperation will be very bright,” said Zheng Ruifang, principal of The Elementary School Affiliated to Renmin University of China, through a translator. “We fully believe that the cooperation and exchange of students and teachers between our two schools will not only help our two schools to grow mutually, but also contribute to the development and exchange of culture and education between our two countries.”