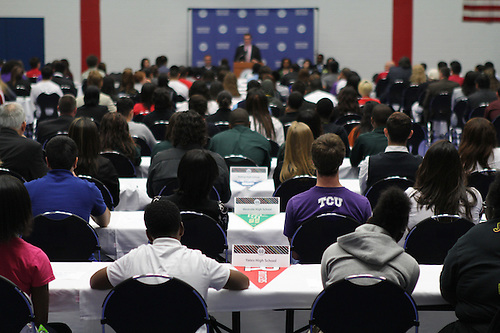 Hundreds of seniors made their intent to pursue higher education official at HISD’s first ever Academic Signing Day held at the Delmar-Tusa Athletic Complex on April 26, 2013. Much like athletes are celebrated for committing to a college, HISD seniors who were awarded scholarships to attend a two or four-year university were honored at the district’s inaugural event.

“I think it’s wonderful that HISD is formally recognizing our students who have worked hard throughout high school and are now seeing the rewards of their academic efforts,” said Austin High School Principal Jorge Arredondo.

“Normally it’s only athletes that have a signing day,” said Jones High School senior Kiara St. John. “It’s pretty cool that we are getting recognized for our talents and accomplishments.”

All HISD high schools chose five “academic ambassadors” to represent their campus at the signing ceremony. Each student was selected because of their academic excellence, their determination at overcoming personal obstacles and for performing great service to their school or community. At the end of the event, all students signed a certificate of intent for a two or four-year college or university.

See photos from the event and pictures of the “academic ambassadors” on HISD’s Facebook page.

State Representative and Milby High school alumna Mary Ann Perez commended the students for pursuing higher education and challenged them to take their hard work to the next level. “Attending and graduating from college will make a tremendous difference in your life and in the lives of your children and children’s children,” Perez told the crowd of students, parents and HISD staff members.

Last year, HISD students were offered $180 million in college scholarships. The Class of 2013 is hoping to beat that record as scholarship offers continue to come in on a daily basis.