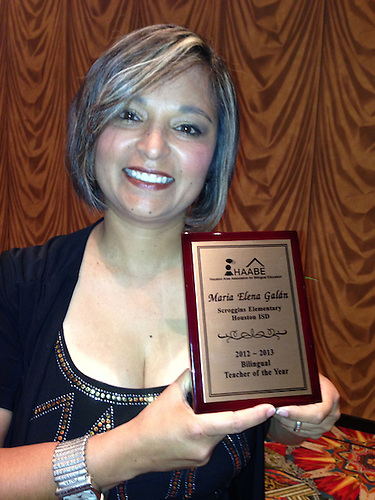 When Maria Elena Galan first came to the United States in 1993, she immediately enrolled herself in ESL classes at Houston Community College. “I had very limited English skills so I had to study and practice, practice, practice,” said Galan. Twenty years later the Scroggins Elementary School teacher draws from her own personal experience learning the English language to motivate and help her fourth grade students and their parents.

On Friday, April 27, Galan was honored as the 2013 Bilingual Teacher of the Year by the Houston Area Association for Bilingual Education (HAABE). Galan was nominated for the honor by her principal San Juana Elizando.

“I am extremely proud of her,” said Elizando. “She has high expectations for herself and for her students.”

Galan has taught at Scroggins for the last five years and before that she was a teacher at Eliot Elementary. In addition to teaching fourth grade bilingual students she coaches several after school sporting teams including soccer, basketball and baseball.

“I believe it’s very important to create well rounded students,” said Galan. The Monterrey, Mexico native also tries to make her students more aware of the world around them by taking them and their parents on after school and weekend outings to the public library, movies, museums and even fishing. The field trips inspire the students to have something to write about in class. Galan’s class also writes to soldiers serving in the military in Afghanistan and recently raised $200 for the Leukemia Society.

“I love exposing my students to situations where they can use what they have learned in class and apply it to the real world,” said Galan. “I always tell my students to never stop learning and never be afraid to make mistakes.”

The advice is rubbing off on parents as well. Many regularly approach her for guidance on how they can learn English and for ways they can help their child with school work at home. “Bridging the gap between home and school is essential in bilingual education,” said Galan.