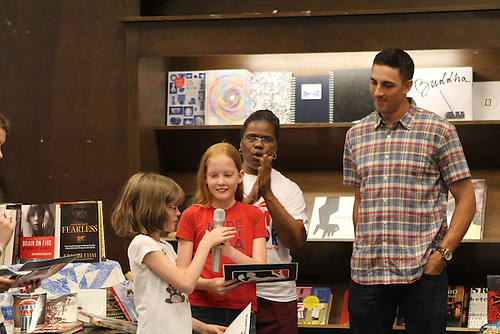 He may be a catcher for the Houston Astros, but Jason Castro is pitching in to help HISD with its comprehensive literacy efforts. Castro and his wife, Maris, have created a new literacy initiative called Castro’s Kids which will be providing funds, books and incentives to supplement HISD’s Name that Book competition and the district’s successful Millionaire Club Summer Reading Program.

“Maris and I couldn’t be more dedicated and excited to launch Castro’s Kids,” said Castro during HISD’s Name that Book Fair event on May 11, 2013 at the Bellaire Barnes and Noble. “We attribute not only meeting each other, but many of the opportunities we have been given throughout our lives, to education. By promoting literacy in the Houston school districts, we hope to make an impact in the area that we are proud to call our home.”

The couple will be donating funds to the annual Name that Book Competition on behalf of Castro’s Kids which will be matched by the Major League Baseball Players Association (MLBPA). In addition, Castro’s Kids has partnered with Better World Books, and will be giving 5,600 books to three yet to be named HISD schools to support their Millionaire Club summer reading efforts. The 25 students from the school with the highest increase in summer reading participation will win an all-expenses paid trip to an Astros game and other Astros memorabilia.

Also through Castro’s Kids, the Houston Astros will host a book drive at Minute Maid Park on June 29-30, 2013 when the team faces the Los Angeles Angels. The books collected from that weekend will be distributed throughout HISD during the upcoming school year.