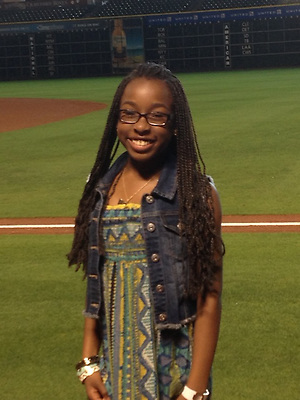 Marshall Middle School student Jordyn Turner will head to Washington D.C. this summer to serve as a Houston/Harris County ambassador at the National Campaign to Stop Violence. The seventh grader, her parents and her school principal were surprised with the news at a special ceremony at Minute Maid Park on Saturday, May 11, 2013 which brought together student finalists who wrote essays examining the problems of youth violence.

“Jordyn is a unique, spirited individual who really cares about making a difference at school and in her community,” said Marshall Middle School Principal Michael Harrison. “We are so proud of her.”

This spring, Turner and nearly 17,000 middle school students from 39 school districts in Harris County wrote essays that addressed the issues of causation, effects and solutions to violence as part of the Do the Write Thing Challenge program. The program is an initiative of the National Campaign To Stop Violence, a non-profit, non-partisan, organization composed of community, business and governmental leaders who have come together to reduce youth violence across the United States. Since its inception, it is estimated that more than 1,000,000 students have participated in the challenge.

In her entry, Turner wrote, “To prevent violence you can learn to have better character. Start with one person at time. If other children see you demonstrating good behavior, they will most likely want to be the same way.”

Turner and 288 other Harris County student finalists, including over 170 from 12 HISD schools, gathered with their teachers and principals at Minute Maid Park to receive recognition for their entries and to hear from past winners. At the event, two students, including Turner, were chosen to represent Texas during the National Campaign to Stop Violence Recognition Week.

As part of her win, Jordan will head to Washington D.C. this July to be recognized along with other students winners from across the U.S. during a special ceremony. She also will present her views on youth violence to such national leaders as the Secretary of Education, the Secretary of the Interior, the Attorney General of the United States, and Members of the Congress. In addition, her essay will be published and placed in the Library of Congress. To read her entire essay, click here.

“I am so honored and excited to get to travel to D.C.,” said Turner. “I hope to meet a lot of important people and visit the White House.”