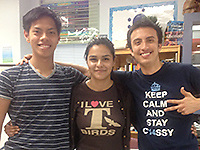 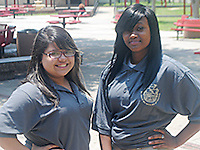 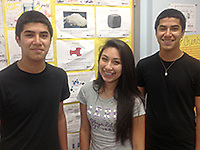 Seven Eastwood Academy students and two Furr High School students have been selected to attend several prestigious learning programs this summer. All of the students are a part of EMERGE, an HISD program designed to help bright students from low-income families attend Ivy League and other top-tier colleges.

Eastwood students Jorge Garcia, Darryl Beronque and Nancy Aguilera have all been offered full scholarships to attend Cornell’s Catalyst Academy. Only 44 students nationwide were selected to participate in this prestigious summer engineering program held at the Ivy League College in Ithaca, New York.

Meanwhile Eastwood student Ivy Salinas and Furr High School students Sade Harnsberry and Karen Banda are headed to London, England this summer. They are three of only six students in the state to receive full scholarships from the British American Foundation of Texas to attend a summer course at the American Community School in London, England. Last week, over 200 people attended a special banquet that was held in their honor at the Houston Federal Reserve Building in Houston.

“A variety of Ivy League and Tier I colleges and universities offer summer programs and scholarships for students,” said EMERGE founder Rick Cruz. “Our students are more than qualified, they just need to know about these programs and apply. That’s where EMERGE comes in.” EMERGE also works closely with DiscoverU, a local nonprofit organization that helps connect low-income students to summer programs.

The EMERGE program was created in 2010 by Cruz, an Ivy League graduate, while he was teaching at HISD’s Moreno Elementary. The program is currently active at Eastwood, Furr, Chavez and Sharpstown High Schools. However, Cruz was recently promoted to the role of assistant superintendent and charged with expanding the program across the district.

“Most schools, including the most prestigious college and universities, are actively seeking qualified and diverse students, regardless of their income level,” said Cruz, “It’s our job to let students and parents know about these amazing opportunities and expose them to what is out there.”

This June, over 80 HISD students in the EMERGE program will also be traveling to the northeast to visit top-tier colleges, including Harvard, MIT, Tufts, Brown, Yale and Columbia.