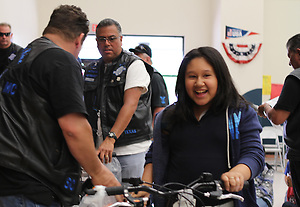 If the smell of new rubber bike tires didn’t serve as the theme for Friday’s bike giveaway at Coop Elementary, the roar of nearly 20 motorcycles entering the school’s parking lot sufficed.

Members of the Thin Blue Line Law Enforcement Motorcycle Club, with a donation from the Lester and Sue Smith Foundation, donated more than 90 bikes to deserving students at the school as part of the Bikes for Excellence program. The giveaway was part of a two-day effort to give more than 350 bikes to Houston ISD students at four schools who excelled in academics, conduct and attendance.

“If they can understand that, hopefully we can save many of them in high school and get them to college.”

Each student received a new bicycle, a lock and a helmet. In addition to Friday’s donation at Coop ES, students at Garden Oaks, Looscan and Garcia elementary schools also received bikes last week.

The Bikes for Excellence program is in its seventh year, Jaimes said, having donated only a handful of bikes in its first year.

“I can’t think of a more worthy cause than to help kids in the same neighborhoods that I grew up in, that had the same struggles I had growing up” said Rico Garcia, the national president of the motorcycle club. “Because I succeeded… I feel like it’s my job to give back. We all feel the same way because we grew up in public schools.”

The students aren’t the only beneficiaries of the bike donation, Garcia said, noting increased attendance at school leads to more funding and better academically prepared students. He also hopes students have a better understanding of law enforcement.

“We want the kids to know that we’re just like them,” said Garcia, a Davis High School alumnus who retired from the Houston Police Department after more than 30 years of service. “They can come to the police if they need help. They don’t have to fear us.”

The motorcycle club is comprised of current and former law enforcement members, including those in HISD’s police department, Houston PD, Harris County Sheriff’s Department and other agencies.