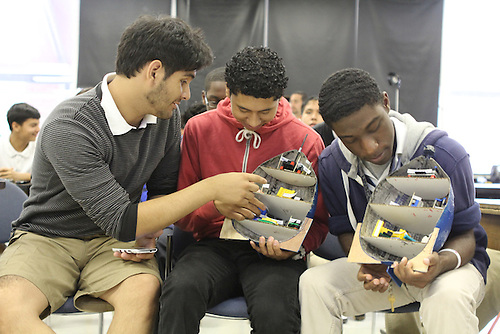 Although she is just a high school junior, Booker T. Washington student Elizabeth Nolazco is managing a project to build a colony on Mars. She and her classmates are collaborating with students at the Ormiston Victory Academy in Norwich, England. The cross-Atlantic team is designing and planning every aspect of interplanetary living.

“We Skype every other week and discuss everything we need to build a base on Mars from the working space, to the kitchen, sleeping areas, restrooms and the airlocks that separate them,” said Nolazco. “We are learning so much about science and life in space, plus learning how to work with another project team that is far away.”

How did students in Houston, Texas, and London, England, come together? The common connection is KBR. Mike Austin, who is a Chief Technical Engineer for KBR in England, worked with his daughter Lucy Austin, director of education at the Victory Academy, to create a partnership program in which British students could engage in science and engineering projects with a global perspective.

Lucy Austin coined the program’s name – SAMbassadors, a combination of science and ambassadors. The program was so successful that the father and daughter team reached out to the KBR Discover Engineering Committee (DEC) to recruit an American school that could join in the collaboration. The perfect fit ended up being HISD’s Booker T. Washington High School for the Engineering Professions.

The two teams of students have been collaborating via Skype and sharing documents online throughout the school year. In March, Nolazco and her classmates traveled to London to visit their teammates and spend two days working together.

“The face-to-face meeting really strengthened our relationship and is making our Skype meetings even more productive,” said Nolazco. “I appreciate KBR for creating this program for us.”

Victory Academy has been determining environmental conditions on Mars such as wind speed, temperature, atmospheric gases, sunlight and shade, radiation and soil conditions. Washington is designing the living conditions.

“The support KBR has given to us and the school in England has been amazing,” said Washington High School Principal Lashonda Bilbo-Erwin, who recently traveled with students to England. “It has allowed our students to become global learners as well as out-of-the-box thinkers and problem solvers.”

Along with engineering support from KBR personnel, the SAMbassador students are receiving technical support from NASA. In fact, Washington students have built two rockets; both have been approved by NASA and will have actual flight tests in White Sands, New Mexico this summer. Meanwhile, the British students at Victory Academy are creating 3D CAD drawings using a licensed Plant Design Management System that KBR supplied.

“Not only is this a wonderful science and engineering program, but it’s also giving my students an introduction to solving real-world problems and with working with others from others around the world,” said Washington engineering teacher Dr. Nghia Le.

Students from both schools with continue collaborating over the summer and into the next school year.