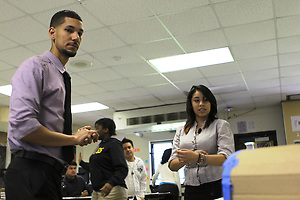 In the wake of recent natural disasters such Hurricane Sandy and the tornado that struck Oklahoma on May 20, a group of Jones High School STEM Academy students have taken the skills and knowledge they have  learned in class and applied them to the real-world problem of providing immediate housing to the survivors of such tragic events.

Over the last year, Jones students have planned and designed temporary emergency shelters that could be used to house up to five people in harsh temperature conditions. Multiple teams of three students each worked to produce different representations of the emergency shelter based on the design requirements of a hypothetical client.

“I used a lot of math and a lot of technology and engineering to see just how the project would come together,” said Jones student Keshuna Willhite. “It was really hard, but I love math, and it made me love math even more.”

The teams also had to meet certain design demand, such as a restriction stating that the shelter can only be heated by the body heat of those inside it. To accomplish this, the students had to utilize what they learned in the class to then determine what shape, size, and materials would be best suited toward creating a shelter that could be quickly and effectively deployed.

After evaluating the design proposed d by each group, the students then worked together to build a single, working prototype. The prototype was then built using over $500 worth of single-walled cardboard donated by Pratt Industries of Houston, a corrugated box producing company.

“It was great seeing these kids come up with a design and create a sustainable product from corrugated materials, which is what we do every day,” said Scott Fuselier, general manager of Pratt Industries of Houston. “It’s a great project and we were happy to be able to donate and contribute to it.”

The importance of the donation was not lost on the students, many of whom now hope to use the project as a stepping stone towards creating a method of giving back to their own community.

“We want to be able to change people’s lives in a way that gives them hope,” said Jones student Deysi Marquez. “When they lose their homes and have nothing else, we want to give them some sort of relief that they can look forward to.”

Jones teacher Justin Taplet hopes to continue using the project next year by educating students that, now that they have a working prototype, they must continue to make changes and improvements to it to create a fully functional, final working product.

“From here they will now take this product, and next year they will redo and redesign it,” he said. “This will show them that it doesn’t end here, it keeps going until the final product gets perfected.”